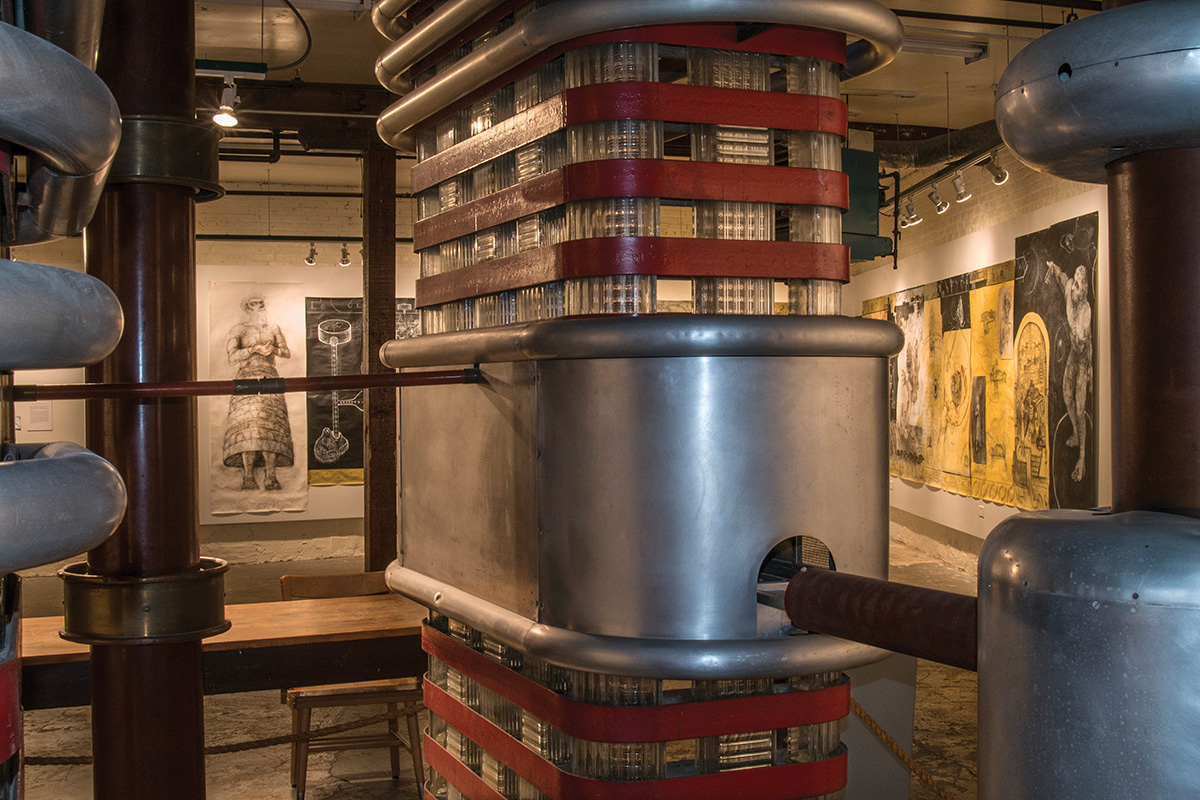 The Search of the Myth in the Art of Rebecca Wolfram

I am from a small town in Mexico where every year there are different festivals, secular and religious — to the Patron Saint, for the Independence, the Revolution, etc. I didn’t realize the importance of those festivals during the time I lived there. It was here in Chicago, two years after my arrival, that I understood their significance. Here I had a job, a schedule, an apartment but something was missing. It was not only the festivals but also the stories that supported them: the myths, the legends, the historical events. It seemed that the rational part of myself was fulfilled and everything was in its place, but the intuitive part of myself was not being cared for. To explain in psychological terms, the left side of my brain had food everyday and the right side was starving. Little by little I became aware of that. It wasn’t until I started to read poetry that I felt I began to get that other food.

In 1992, I participated in a literary workshop. It was like a religious event to meet those writers every Friday. Eventually I started to write my own short stories in Spanish. I continued nourishing that other side not only with literature but with the visual arts: painting, sculpture, movies and theatre. For many emerging poets and narrative writers the cultural center Calles y Sueños was essential to educate the eye. In that center we were in contact with a dozen of visual artists and their creations. Rebecca Wolfram was one of them.

After 20 years there is a thought that has come to me: religion with its many mythical stories and the arts run parallel to one another. Both go after the mystery. Who wrote the story of Gilgamesh? A poet or a collective that had one poetic voice. Who continued the saga? Probably the following generations that functioned as one voice. The voice of the people.

Last December 11th, I was walking in a park in Lincolnwood around 5pm and six Mexican women were also walking in the park, northbound; five minutes later I saw another group of women who were holding an imagen of our Lady of Guadalupe. I asked them where they were going. One woman answered that they had already walked four hours and planned to walk three more hours to reach Des Plaines in order to celebrate the saint day of the Virgin. Those women and I are on a similar path, trying to feed that part of ourselves, the non-rational part.

The rational part flows in chronological time, the time that is measured by days, hours, weeks. It helps us to go to work, to pay the bills, to catch the train, etc. The intuitive part moves in the time of the origins, the perpetual present. A present that is continuous. To be in front of Rebecca Wolfram’s paintings is to experience that present. It is necessary to be very attentive, not to be distracted. Then we are able to enter into the mystery of the colors, the texture, the figure.

Last year I read the myth of Gilgamesh. I had heard that it was the first story ever written on clay tablets, and I was curious. It was fascinating to follow the ups and downs of the king Gilgamesh. His powers, his sensuality, his sadness, his grief. I was struck by the passage where King Gilgamesh witnesses his best friend, Enkidu, decaying from death, the worms slithering out from Enkidu’s mouth. Franky Piña was preparing at that time a publication of a collection of my short stories. We only needed the front cover. He sent me one possibility and I jumped when I saw the “The Bull of Heaven” in front of me. I didn’t ask if it was connected to Gilgamesh. I knew and I also knew immediately it was the perfect cover for my collection of stories. For me, it was a proof of how the universe connects us and that is not explained by rationality. I had just finished the story of Gilgamesh; Rebecca was painting, recreating scenes from the same myth, and it was through Franky’s eye that we all came together.

I asked Franky to show me other paintings of Rebecca’s series on Gilgamesh. Besides passages of the myth, I saw machines, turbines, metal pipes. The characters of her series Gilgamesh in the Accelerator move seamlessly through machines, an element of the rational and contemporary world, but also they move through mythical time, that is the irrational, the time that is not counted by the clock. 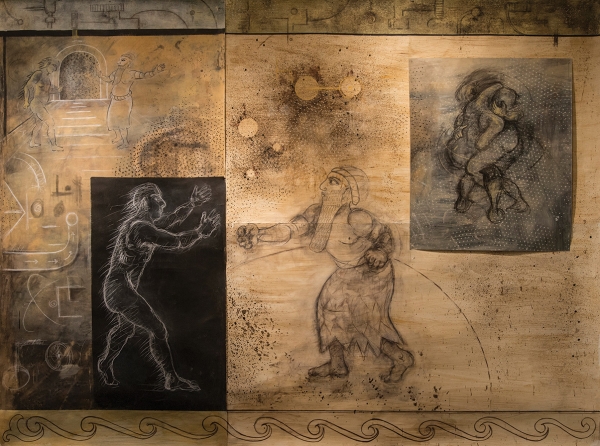 Gilgamesh in the Accelerator (detail) by Rebecca Wolfram