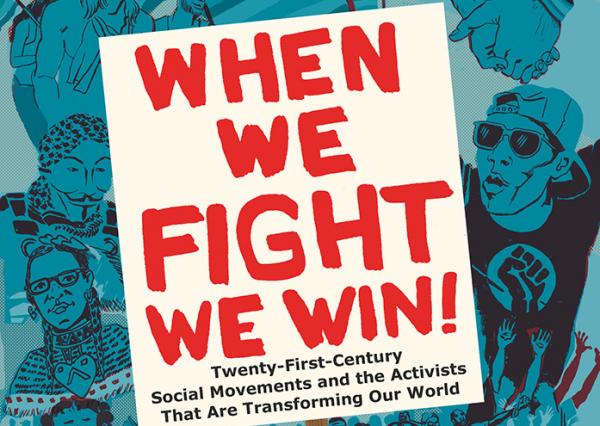 When We Fight We Win: a comprehensive look at our social movements

When We Fight We Win: Twenty First-Century Social Movements and the Activists that are Transforming Our World, by Greg Jobin-Leeds and AgitArte
The New Press, paperback, $17.95, ISBN 978-1-62097-093-5

When We Fight We Win, a book by Greg Jobin-Leeds and the Boston based art collective AgitArte, is a comprehensive look at the social movements that are planting seeds in the first 15 years of the 21st century in the country.

The widely illustrated book, with dozens of colorful art posters linked to struggles all across the United States, is a fascinating journey that brings us closer to the men and women who areinvolved in the LGBT movement; the fight to defend public education; the initiative to end mass incarceration of African American and Latino men; the fight of the DREAMers to secure a foothold in the only country they have known; the economic movement to bridge income inequality; and the global movement to restore the environment.

The fight for the soul of public education, for example, goes into detail about Chicago’s struggle to stave off the rush of new charter schools and the fight of the Chicago Teachers Union against a local government administration set on weakening it. The book describes local community groups fighting back against the closing of 50 public schools by Mayor Rahm Emanuel.

As communities of color in Chicago try to survive, other activist voices speak up against gentrification and the impact of closing public schools which often leave the neighborhoods open to speculation and the redevelopment of urban areas for a new and upscale population.

In the chapter about the DREAMers, the book follows Miami immigrant activist Gaby Pacheco, born in Ecuador and living in the United States since she was seven-years-old when her parents brought to the country. She recalls in the book how she became aware of her status as an undocumented youth.

“In eighth grade, I made a decision that I was going to start telling people my status and my situation because I was not the only one,” she recounts in the book. Later, she recalls, many other students came forward to tell her their secret that they, too, were undocumented.

Pacheco and Juan Rodríguez, Felipe Matos and Carlos Roa would walk for four months in 2010 and cover fifteen hundred miles from Miami, Florida, to the front of the White House in Washington D.C. during their Trail of DREAMs, a journey which taught young immigrants across the country to stand “undocumented and unafraid.”

In each stop along the way, the DREAMers would stop to their stories, an event that motivated other DREAMers in other cities to come out and defiantly say they were undocumented, too.

In the chapter on economic inequality in this country, the book shows how Occupy Wall Street developed as a “leaderless” movement; how it spread throughout the country and how it eventually was crushed. The book describes how police on November 15, 2011, swept, batons in hand, and “cleaned” up Zuccotti Park in New York City. In the process they destroyed a library and a kitchen that fed, mentally and physically, the movement to bridge the gap between the 99% and the 1%.

But despite the demise of Occupy Wall Street, several movements sprang forth from that “American Spring” and now it is much easier to talk about economic inequality in a country which denies there is a class war between the rich and the poor, according to the book.

While in Chicago on tour to promote the book, author Greg Jobin-Leeds, explained that the title for the book came from the group City Life/Vida Urbana who used this slogan to inspire others to get involved.

“The title of the book comes from a grassroots organization in Boston called City Life/Vida Urbana,” said Jobin-Leeds, “They are the ones that first used this slogan when we fight, we win. And the lesson is that if you don’t fight, you lose. I am alive because some people stood up for my parents and grandparents in Nazi Germany to help them get out. But not enough people stood up and that led to the whole collapse of that society. And what we know is that if people are silent, it is a form of collaboration. And there are 2.5 million people in jail in the United States, more than any other country in the world. If we don’t speak out against this insanity, we are going to see the downfall of our society.”

As mentioned at the top of this book review, there is plenty of colorful art in the book related to the many social movements that have sprung up across the country in the last decade or so. The members of AgitArte, out of Boston, did the book’s design and also contributed art and pictures. The book, however, features many other artists from across the country. One of the artists is Favianna Rodríguez, of Oakland, California, who for the last decade has put her art at the forefront of many struggles, including the fight to defeat Arizona’s infamous Proposition SB1070.

This book will be a welcome supplement to what there is out there already and organizations, highs schools and colleges would be wise to check this book out to get a wider view of what is taking place in our country.