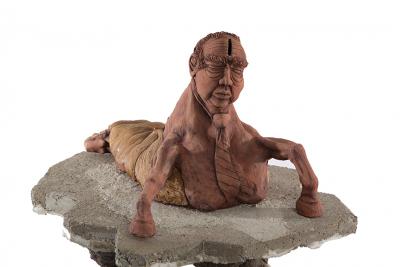 I would feel more optimistic about a bright future for man if he spent less time proving that he can outwit Nature and more time tasting her sweetness and respecting her seniority.
~Elwyn Brooks White, Essays of E.B. White, 1977

Without a doubt, the debate over the impact of our human footprint on this planet has never been as important as it is now. Not only the effects of pollution but also the poisoning of the food chain have created a world in peril. Unless the present generations learn to respect the Earth’s seniority, our future is not an optimistic one. Although the Earth cannot speak for itself, it has an active spokesman in artist Alfonso Piloto Nieves Ruiz. The Earth has found a warrior, a survivor, an inventor and an advocate whose innate nature appears to have embraced the call for justice. In his work, Piloto lifts up a cry of pain on Earth’s behalf and, with a gifted touch, creates intricate metaphors of the agony of the fight between man and nature. A fight that man began and needs to end.

Piloto is an intense artist on the inside yet humble and friendly on the outside. His candid spirit allows him to engage fervently in conversation, advocating for his work and that of the importance of Earth’s conservation. He is a self-taught artist of humble beginnings who began his trajectory in the city of Querétaro, México, playing with dirt, rocks, and found objects. As he made Chicago his new home, art followed him and enlisted his natural gift and visionary mind. Piloto works primarily with clay, giving birth to fantastical figures made of soil and discarded objects. An avid collector of objects, he finds new meanings for such undesirable goods. In a culture of disposables, Piloto collects, repurposes, recycles and reinvents with the mind of a scientist. For him, these are more than simple objects; they are fascinating remains and physical traces of our contemporary human behavior. Each piece tells its own story through its original purpose. However, in the hands of the artist, each piece embraces a new meaning and a new life. Piloto employs contemporary imagery and objects of mass consumption such as iPods, keyboards or toys combining them with pre-Columbian mythical figures. It is in such rich fusion of cultures and realities that one finds a trace to Piloto’s own life story. The past meets the present and warns us about the future.

In the well-known “Unfinished Slaves” sculptural works of renaissance artist Michelangelo Buonarroti, the human forms struggle to escape the stone that they inhabit. They become Herculean forces fighting to be freed from their captive confinement. The extraordinary tension between the massive marble slab and the figure in motion provides an insight into the master’s greatness. In such works, the vaguely defined contours of the figure appear to already exist inside the stone as it fights its way into our own world. Such violent force, frozen in time within the solid rock, crumbles away with each of Michelangelo’s chiseled strokes. It is known that Michelangelo saw himself as the one liberating the figures that already existed in each stone. Similarly, in the clay works of Piloto exist the presence of ancient figures awakened by the artist’s own hand. They appear to emerge from the earth in the form of clay sculptures. Their incredible realistic likenesses slowly emerge from the ground as triumphant warriors.

Many of those figures have already been liberated and abound within our midst. In that sense, the artist once again becomes the liberator of such captured creatures. They seemed to have already existed in the ancient past, but now they see the light of a new reality. In the works of Piloto, figures are often depicted as grotesque, at war, or in agony, whereas other times they are as gentle as a woman playing a violin. There is no doubt that there is a strange and captivating beauty in such mythical figures, an aesthetic that confronts the viewer, yet invites him or her to continue searching for more. In fact, Piloto is a master at this. He incorporates detail and hidden objects in the most confined of spaces. This way, the works entice the viewer to close inspection and scrutiny, only to be surprised by what one finds. These works are not entertaining. Instead, they intrude into our very own psyche by appealing to the otherness within each one of us, that other that often consumes and destroys rather than planting and protecting. They also allude to our social and cultural behavior of disposal of unwanted things. Our garbage tells our story and it takes an artist like Alfonso Piloto Nieves Ruiz to retrieve with horror the truth about what is less desirable about our society.

Piloto’s human figures inhabit our world as heroic creatures of ancestral worlds. They are expressive, surreal, highly detailed, full of life, and disenchanted by their agony. At times, they appear to be monstrous with features that would appear as if they just came back from death. They may have two heads, three eyes, and big stomachs or show a ferocity only reserved for those who inhabit the underworld. The realistic appeal of such works confronts the viewer with intensity and engages him or her at every turn. Borrowing from his rich Mexican heritage, Piloto pays homage to the past in the form of symbolic references to the indigenous cultures that inhabited the Americas. In fact, the ancient cultures of the world understood that their survival was strictly connected to their understanding of the land and its natural resources.

If the ambassadors of ancient cultures could come back from the past and engage the present, how would they react to our current decay? In a way, they are already here in the works of Piloto, giving us a glimpse at their dismay, and crying out for justice on Earth’s behalf. It is perhaps this distinct connection with the past that enables the artist to be so eloquent with the present. Although his work makes direct references to Latin American ancient cultures, Alfonso provides a universal appeal relevant to all of us. Not only does Piloto acknowledge his past, but he also confronts his present. Aware of the Earth’s struggles to flourish freely, the artist looks ahead with optimism and reassurance that there is still time to change the course of history.

As a prophet in a foreign land, Piloto employs what he knows best, his Mexican roots and his art, to make a process that collides with a current culture of mass production that pollutes first and asks questions later. His sensitivity for what is sacred and what is profane allows him to engage in the ecological conversation with passion and reverence. Through his work, Piloto has redeemed the ecosystem and empowered the captive forces of nature to remind us all that balance is achieved by reverence and respect rather than arrogance and control over the natural resources of this beautiful planet we share and inhabit. In the end, from ancient cultures to Piloto, it is in Earth’s raw materials that beauty is born.

Sergio Gómez. Artist and curator. Director and co-founder of 33 Collective Gallery in Chicago.