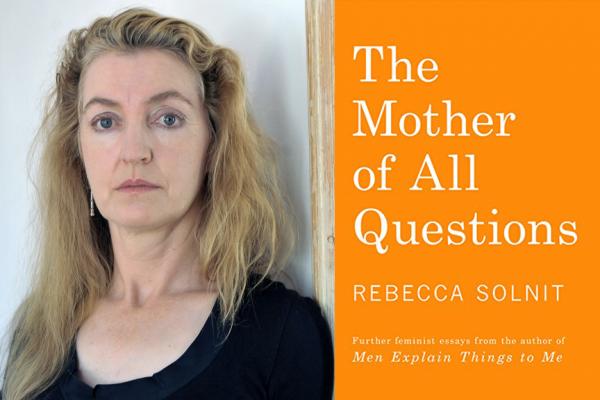 “The Mother of All Questions”

There’s a TV commercial for vacuum cleaners running this holiday season that depicts a hapless housewife frustrated by the messes her family keeps making for her to clean up. Spilled coffee, cereal, movie snacks, wads of dog hair. The woman is of course made happy by the end of the 30 second story because, thanks to capitalism, there is a vacuum cleaner to meet every mess. Most people will watch this commercial (7-10 times if the marketers get it right) and not pause to question the gender norms that are reinforced by its narrative. We are not meant to question why the father doesn’t vacuum or why the mom is always at home and never at work (even though women make up 47% of the US workforce). Instead, we absorb the idea that this is women’s role: she may sigh, but not complain. Her satisfactions in life come by pleasing and cleaning up after others.

Though this advertisement is modernized (she is wearing pants, not a skirt) it is one that could have been played in the 1950s. The fact that is airing in 2017 is a reminder that the gains of feminism will always be precarious. Women may have entered the workforce, but less to our benefit than to those who prefer to pay low wages. And even though Merriam-Webster has chosen “feminism” as its Word of the Year, Rebecca Solnit reminds us in one of her essays from her latest collection, “The Mother of All Questions,” language both defines and constrains our ideas of gender and power relations, and that a deeper analysis of other symbols and structures is necessary to escape the limits of language.

“The Mother of All Questions”, from Chicago radical publisher Haymarket Books, is the last part of a trilogy of books that include “Men Explain Things to Me” and “Hope in the Dark”. In these collections, Solnit plods across the minefield of modern feminism and has become a leading voice for feminists in the 21st Century largely because her analysis focuses not only on the violence of men against women, but the violence of those in power (typically white straight men) against those they oppress. The term “mansplaining” was coined by feminist readers of “Men Explain Things to Me” who understood implicitly what it means when a person in a societally superior position attempts to explain a concept to you for which you are already either expert or more than well acquainted.

Her latest book, published in the Spring of 2017 — after the Women’s March but before #metoo movement really took off — contains essays published since 2014. It is divided into two parts: “Silence is Broken” followed by “Breaking the Story”. Solnit’s writing is direct. Her language, simple. The concepts she examines, however, are a complex weave of the many ways that gender roles are defined, exploited, how violence against women by domestic partners continues to be a leading cause of death for women, how rape remains rampant. All this despite the fact that women can vote, own property, drive cars, become licensed surgeons or astronauts. The central theme to many of her essays is none of these crimes happen on their own. Violence has an actor, not just victims.

The opening essay, “A Short History of Silence” dissects the current feminist reawakening from historic silences. The argument is that there cannot be argument without voices. And for so many years, these voices have been altogether silenced, quieted, or nuanced. Or as Adrienne Rich said of Virginia Woolfe, tailored to express a feminist reality in a tone acceptable to the male audience of her time.

“She was a great explorer” Rebecca Solnit writes about Adrienne Rich. This description reframes the notion of exploration from an external conquering, vast land grabbing, physical dominating manner of exploration to an internal one, to the bravery it takes not to collaborate with a social, cultural, religious dynamic that has for centuries the world over silenced women and their experiences.

In “An Insurrectionary Year” Solnit ruminates on why feminism is having a moment now? Why not sooner? Why not later? It is beyond simply saying it was the election of Trump. Whether you call it the 3rd or 4th or 5th wave of feminism, the #metoo momentum has been building for at least many years, since the rape of a woman at Steubenville, a woman riding the bus in New Delhi, a somewhat random group of women and one man in the Isla Vista mass shootings. She likens it to the Arab Spring. Who knew it would be the beating of a street vendor in Tunisia that would be the break the damn?

In discussing the power of social media, Solnit writes, “It’s like a barn raising for ideas: innumerable people bring their experiences, insights, analysis, new terms, and frameworks. These then become part of the fabric of everyday life, and when this happens, the world has changed. Then down the road, what was once a radical idea becomes so women into everyday life that people imagine that it is self-evident and what everyone always knew. But it’s not; it’s the result of struggle — of ideas and voices, not of violence”

The question remains: How do we continue to create a new dialectic inclusive of women’s voices? Of voices of all who are oppressed worldwide? Incrementally, women have infiltrated masculine dominated spaces and ways of being with our voices, our stories, or visions, and are creating spaces with men who wanted to understand, men who identify with women, and men who learn from and with women. It’s naïve to say it was always women and their voices, or women who were strong enough to stand alone.

But “the” women are rising now. And how.