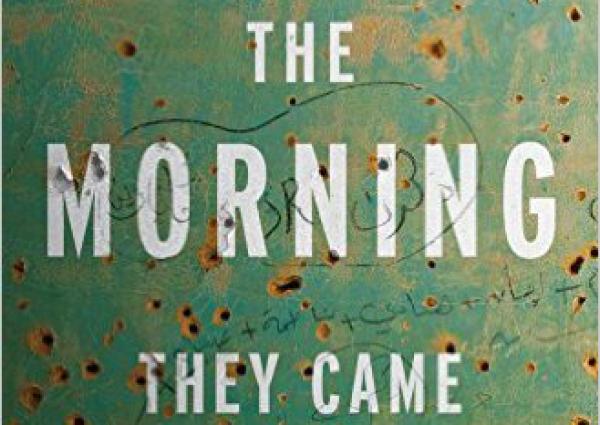 The Morning They Came for Us

Once, in the early 1990’s a friend lamented to me, almost wistfully, that there were no more romantic conflicts in the world akin to the Spanish Civil War of the 1930s to which we could volunteer ourselves — and presumably not lose our precious, little lives.

But I stopped him short, corrected his ignorance. No, I said, that’s not true. There is a conflict right now. It’s happening in Yugoslavia.

My friend had no idea. He didn’t follow the news of the growing war in the Balkans that would eventually cost the lives of tens of thousands of people, perpetuate the worst atrocities in Europe since the Nazi war machine smashed through Europe, and dismember the country of Yugoslavia into its component ethnic parts: Serbia, Bosnia-Herzegovina, Croatia, etc.

I understood his confusion, or his lack of understanding, though. The Spanish Civil War was, to some extant, romanticized. Maybe the last ‘romantic’ war fought; a despicable categorization if not oxymoronic. For wars are not romantic; they might be painted as such by the brushstrokes of artists and versed by poets, but it is not romantic.

The war in Spain attracted many young, romantic types (including Mexicans Octavio Paz and Elena Garro, amidst so many others). And the Republican side received support of great artists and writers: George Orwell’s Homage to Catalonia came out of his experiences as a volunteer on the Republican side; Picasso created his famous Guernica after an aerial attack by Franco’s Nationalist forces.

Certainly Yugoslavia was not perceived as such in the 1990s, not like Spain, where there were the “good guys” of the Spanish Republicans who fought for democracy, a civilian government, and freedom versus the “bad guys”, the Spanish Nationalists who wished to destroy that freedom, and were willing to kill and destroy in order to “save” the country from Socialism and Communism and liberals in general.

Yugoslavia could not be seen as romantic. It was a pitiless, cruel, savage civil war where neighbors slaughtered neighbors and culturally similar peoples (Serbs and Croats speak the same language, divided by Cyrillic and Latin alphabets, respectively) tried to ethnically cleanse each other from contested areas.

Atrocities not even seen during World War II made headlines around the world: Sarajevo, Srebenica, Tuzla, Gorazde... And, for the first time in modern history, tactical and strategic use of rape was introduced. No, this was not a war one could “join up” in a romantic dash of esprit and side with one or another of the contenders.

Spain, it is said, was a testing ground, indecently called the “stage rehearsal” for World War II.

If that was true of Spain and the tragedy of its civil war, then we are living another horrible, indecent “stage rehearsal” for an even greater world-wide conflagration, and it starts in Syria.

Janine di Giovanni’s new book informs us of an impossible-to-romanticize conflict, not unlike the Bosnian war she reported on first-hand in the mid-1990s. In dark, disturbing details, she tells us the stories of the average civilians that are the real victims of this so-called “civil war” in Syria. Because, as she states at one point, the “politicians argue, but soldiers fight.” And kill they do. And torture. And rape.

Ms. di Giovanni starts with a brief remembrance of that war in Bosnia, and the atrocities she witnessed there seemed to be repeated with the same barbarity, this time in Syria but also with the same kind of impunity and lack of interest from the international community.

In a chilling narration, she starts off a year after the revolution had begun; a kind of continuation of the other protests that are now collective called the Arab Spring in countries like Tunisia and Egypt. At this time the elite in Syria could still throw pool-side parties and indulgently drink liquor — this in a Muslim country — while shelling takes place on the outskirts of Damascus.

With the militarization of the protest movement and the formation of the Free Syrian Army (FSA), the government increased the harshness of its reprisals: students, activists, regardless of age or gender, were subjected to arbitrary arrest, torture and rape. The forces of the Syrian government indiscriminately crush any and all opposition activists it could grab — or just innocents caught up in the conflict that could not or would not leave the country.

Currently, there is a glut of books on ISIS. To varying degrees of success and accuracy, they detail its infamous rise, the damage it is doing to civilization, its repugnant savagery of its reign,their motives, their tactics, and some even suggest strategies on how to defeat this menace.

But Ms. di Giovanni’s book is special because it tells the story of Syria from the point of view of the people most directly affected by the war. Ms. Di Giovanni interviews the traumatized survivors of torture, rape, and mutilation; of war, starvation and waiting, long yeas of waiting while living under some of the most difficult conditions imaginable.

The stories are heartbreaking, devastating. This is not an easy read. I warn the potential reader of this book: The crimes against humanity described are almost beyond belief. They are disturbing. But they are, sadly, more than plausible, indeed probable and they are occurring right now, as you read this.

However we would like to turn away, to pretend that these horrors are not happening — cannot happen — in a world so connected by internet and smart phones, we must bear some witness to the perpetrators of the crimes described in the book.

This book must be read, if only because it has been written. To know the suffering of others, that it is happening now, in this day and age, is important.

Ms. di Giovanni asks in her book: “How does someone return to the human race after being so brutalized?” Our task, as readers of a work like this, who have the dubious privilege to still be “in” the human race, is to bear witness to this world’s cruelties. For to not acknowledge what is going on in Syria (and not only there, but all across the globe, in places like Nigeria, Iraq, Libya, and Afghanistan), is — to some extant — to side with the executioners, to side with the perpetrators of torture and rape, murder and savagery.

Like my friend many years ago, we can neither join up, nor ignore the horrors of this latest “civil war” as we live, safely ensconced, in the faux-idyllic redoubt of North America. But we should at least be aware.

Manuel Morales y Méndez was born in Mexico and grew up in Chicago. A bookseller at local bookstores, he has over 20 years experience in the trade.