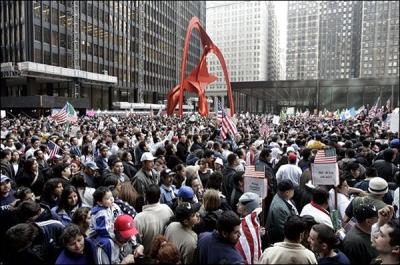 The March 10th Anniversary: Everything that Happened was Against the Immigrant

On March 10, 2006, the immigrant community in Chicago and its suburbs took to the streets in a mass march to protest against the “Sensenbrenner” bill that would make all undocumented immigrant criminals along with any other person who would helped them. The cry of " We Are Not Criminals – We are Workers " was heard throughout the nation and alarmed both the American right and the Liberal Democrats and their neighborhood allies.

Many lament the fact that the “Immigrant Spring” that brought out 3.5 million demonstrators across the United States accomplished nothing. But under close scrutiny, a lot happened because of the marches. The problem is that everything that happened was against the immigrant. Starting with the democrats’ runaway race to dismantle the grassroots movement that started in Chicago and was demanding immigration reform from them; the s crude way its operators were dispatched to all the cities to push the new slogan that deflated the movement: “Today We March, Tomorrow We Vote.” A slogan with which corporate not for profits fell in love and was promoted in Chicago by organizations such as the Illinois Coalition for Immigrant and Refugee Rights; a slogan that had nothing to do with migrant workers’ demands.

Then, in the absence of an immigrant united front, several states and municipalities, led by the right, began to design their own Anti-Immigrant Laws. To make matters worse, President Barak Obama gave the green light to detentions and deportations now numbering 2 million.

Today we are faced with a dysfunctional Congress from which we cannot expect results, we have a community under siege, and we have uncreative leaders unable to show us the path to follow. But we still have the children of undocumented immigrants born in the U.S., who eight years ago were 10 years of age. They are our hope and must be organized, they can now elect legislators who truly support our cause and thus change the direction in which we have been forced to travel. With our youth, I see a new March 10th coming.