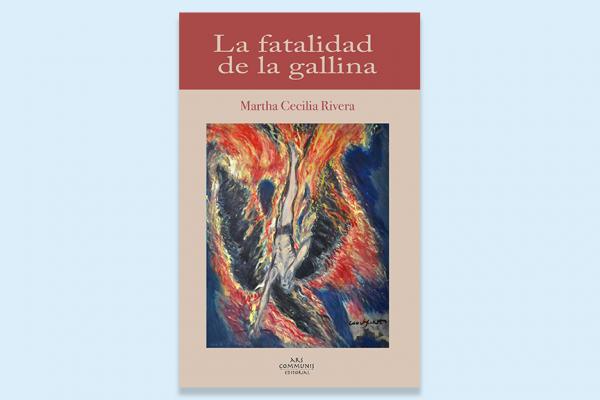 The Fatal Destiny of the Hen

On April 14, 2018, the Chicago Public Library will host a bilingual presentation of the most recent novel from Colombian-Chicagoan author Martha Cecilia Rivera, La fatalidad de la gallina. The novel is available in Spanish at the CPL while its English version will be published soon. El BeiSMan just published the novel’s prologue by author Iván Beltrán Castillo.

The Tragic Feast of Consciousness

Once I stated that adventure novels were not necessarily those pinpointed in Western tradition, beginning with that hatching of pages from Jack London, Stevenson, Julio Verne o Emilio Salgari. I surmised that those works, which describe in great detail lengthy journeys, battles, inflamed or merciful historic jousting, brawny anecdotes, meticulous, yet factual quarrels, visual actions, and all the spectrum of the verifiable reality, were mostly novels about hyper realities and truthful records of the endless dancing of mankind.

My mind was invaded by the hypothesis that real adventure novels, in the broadest and deepest sense, were actually (thanks to the most intricate resources from imagination and the subtleties of creative psyches) those where the inner crystallization of the consciousness’ epopee occurred. That, along with a formidable downpour of sensations, images, symbols, accidents, rhetoric word-playing, and fantastic associations burning inside all of us, which are produced—like harvest of a dream, by what we’ve found in the streets where we walk, the houses where we live, the cities where we work…

Seen under the light of the mind and its labyrinths (an unutterable bonfire), the exterior merely is a sort of coil or springboard that prompts you to your “La-bas”. Without the exterior, the concrete reality is nothing but a distant image, an echo, an illustration, or the stage for a theater piece that delivers to public only disconnected segments or scraps.

Juan García Ponce wrote in a memorable essay, that any literary endeavor was “the apparition of the invisible”, i.e., a place where inner ghosts, as well as nameless obsessions, recurrent thoughts, and the music of one’s own thoughts, merged to demonstrate that humans were nothing but chaos and bagatelle before wrapped up by such supreme action.

The group of those who set their literary work in proximity with such insight is large. It has also been unhappy, generally unrecognized at the beginning, and, to use a social expression, hard to deal with. I’d include in this group to James Joyce (of course!), who is the supreme consciousness hunter in the history of the literature, the arts, and, -undoubtedly, the psychiatry, the philosophy and the theological inquiry.

There have been some others, however, who persisted in their resolve to weave the novel of our inner adventure. I should mention here to Herman Broch, Alfred Doblin, the great Virginia Wolff, Roberto Musil, Julio Cortázar, Raymond Russell, Margerite Yourcenar and José Lezama Lima.

That a particular novel might come to be, let’s say, abstract, is not the matter here. Neither is it that such novel might have told nothing about external things, or lacked allusions to objective reality, or seemed to have turned its back to that enormous worldliness masking existence. The matter here is that all of that is involved and judged within that intimate sphere where humans compile universe, transgress it and modify it. Starting with Leopold Broom in Dublin, the images of the exterior generate a maremagnum that I’d dare to call ontological.

I can easily visualize to Martha Cecilia Rivera at her high-rise building, top floor, in Chicago, while reading the Windy City’s handwriting and advancing in her attempt to join, humbly and courageously, that club of those great writers going after consciousness with their literary fiction.

In “The Fatal Destiny of the Hen”, the most recent work of this Colombian author who docked in USA many years ago, the “apparition of the invisible,” and the blazing fire ignited by reality, are apparent through a narrative that is poetical in most pages and happily erotically nuanced.

The narrator of this novel is, virtually, a sarcastic observer of happenings around him, who, with clear mind, see them as signs, metaphors, and excuses to succumb to voluptuousness and to blossoming of consciousness.

Absorbed in a work environment that he hardly can endure and where he performs his duties with irreproachable dignity, the character is a “metaphysical voyeur,” a subtle watcher, an ironist to usual circumstances. Working with a business organization (Integrated Stores) to expand internationally its grip, his real interest is a woman who can be seen only in a chiaroscuro. She will be tormented by the sordid trap that generally lies in wait in that kind of places: Irene. She is poem, is seduction, is sensuousness and also a harsh critic of the bad habits that reign on those places as quiet dictatorships. She is both, an excuse and a way for happenings (which are presented behind that essential adventure of imagination) to not to bury or prostrate the hero, but rather propel him and allow him to build his own myth over the debris of his gray and lean life.

The other characters walking around this hero and Irene (Daniel Pirro, Abel Solo, Mónica, Andréa y Amanda) are as viscous and indecent as the characters from Juan Carlos Onetti or Milan Kundera. They are examples of a “mental cannibalism” that the author cruelly attributes to humans.

A novel from the inner side that fiercely lights up the faint stay of quotidian, “The Fatal Destiny of Hen” brings, with these confused animals of menial appearance, one of its great invitations to reflect.

It is disrupting to me the unbelievable mastery of Martha Cecilia when assembling, as a whole, a daily-life plot with a degree of suspense, a sensuous dalliance around the human body and its itineraries, and a deep reflection on what humankind has made with its journey through the perpetual amazement of gone days. Mostly, the final orphanage after seeing all that large spectrum of gods with their consolations.

Iván Beltrán Castillo is a Colombian journalist, author, and promoter of Arts and Culture. Beltrán Castillo received the Colombian National Poetry Award in 1990; the Simón Bolívar National Journalism Award in 1995, and the National Screenplay Award in 2001. He is founder and director of Con-Fabulación, an online literary magazine that won the Alzate Avendaño Award. He is also founder and Co-Chair of Fundación Común Presencia, a non-profit publishing house that has published about 130 titles. Creator and Curriculum Director of 6 college education programs in Journalism, Poetry, Drama and Fiction writing. He is the author of the poetry books Consagración del espejismo (1990) and Necesito el fulgor (2013 - present, work in process); the novels Café con aroma de mujer (literary versión, 1995) and La vida de los sonámbulos (in press); the screenplay Sin Amparo (2001); the TV series Extrañas pasiones and El prisionero del sexo (2004). Beltrán Castillo is the editor of Antología de cuentistas bogotanos, Antología de poetas bogotanos, and Antología venezolana de la poesía colombiana (2008).