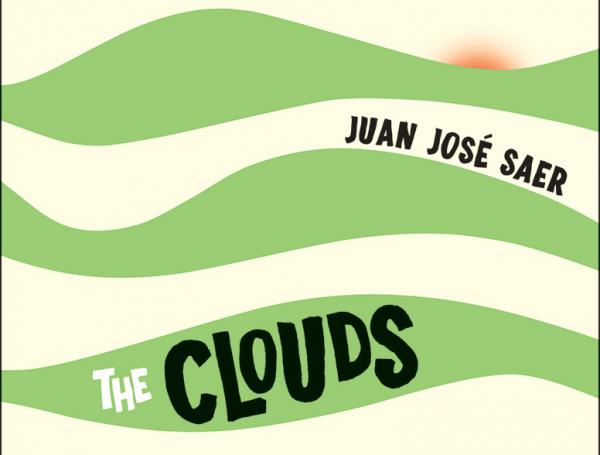 ...Though outward circumstances do indeed shape our lives, there is always something within us that makes us lose sight of those circumstances and colors them with our perceptions-and our perceptions, though we never realize it, are tarnished by pure delirium.
—Juan José Saer (trans. Hilary Vaughn Dobel), The Clouds

Like much fiction labeled literary, The Clouds escapes any precise synopsis. Right on the copyright page, one can see the difficulty it was for the Library of Congress to define: FICTION / Literary. | HISTORY / Latin America / South America. | PSYCHOLOGY | Mental Health. | POLITICAL SCIENCE / Colonialism & Post-Colonialism.

While not precise, it’s not inaccurate. And it’s all there in an airtight 160 pages. The Clouds is by Argentine Juan Jose Saer and was originally published in Spanish in 1997. The English translation, by Hilary Vaughn Dobel, first appeared in May of 2016.

Dobel’s English prose clearly shows Saer to have been a deft and careful writer. Saer, with Dobel’s translation, is the type of novelist who can move a story forward with the equanimity and sharpness of an opiate, so that traditional techniques like chapter breaks, or chronological storytelling are ignored without annoyance. You’ll find neither here, and it’s of no detracting or distracting consequence.

There is one break in the narrative, however: A five page prologue introduces the rest of the book. Seemingly inconsequential to the story proper, Pichón is a Parisian self-exile who has returned to the city to “settle affairs with a few friends.” There is no explanation of what those affairs are, or why they beg to be settled.

For reasons unexplained, he remains in Paris, working in an unidentified university position. It is through one of his rejuvenated friendships that he receives a manuscript on floppy disk accompanied by a letter. This friend has been “deciphering and transcribing” certain archival texts from “this place” and has asked Pichón to take a look. It may be historical, it may be fictional, but in either case, nothing has been proven.

The friend suggests a title for the manuscript: The Clouds. After a short shelving of the disk, Pichón sidles up to the computer with a bowl of cherries, and he is left behind, or beside, as we launch into the manuscript.

It immediately becomes clear that the place Pichón’s friend was referring to is Argentina, specifically the region between Buenos Aires and Santa Fe. Modern day Paris and Pichón have been replaced by our new author, Dr. Real (of course, as pronounced in Spanish), who is writing a memoir based on a series of events that took place in 1804.

If you are not versed on this era and locale of Latin American history, it does not take long to infer from the novel that the Spanish were heavily involved in the process of colonizing South America. The Spanish monarchy, the colonial subjects in revolt, the natives, and the threat of civil war are constant forces lining every facet of the memoir, and yet they are not at all Dr. Real’s direct subject. They are the real societal pushes and pulls that contain Saer’s fictional characters.

Dr. Real has returned to Argentina by way of France after studying “a new science,” having become a “specialist of mind and soul.” It was common in the early 19th century to conceive of mental disease as originating in and being cured through the body.

Consequently, Dr. Real and his mentor, Dr. Weiss of Amsterdam, are perceived in their endeavors more as nuisances than renegades, although they have been granted permission by the Spanish courts to set up shop just outside of Buenos Aires. Their clinic, Las Tres Acacias, is host to various children and relatives of the aristocracy.

Speaking in hindsight thirty years on, Dr. Real tells of his admiration for Dr. Weiss and his musings (“The moment, esteemed friend, is death, death alone. Sex, wine, and philosophy, they tear us from the moment, they keep us, temporary things, from death”), as well as his proclivities (Dr. Weiss had what he would never call a weakness for prostitutes and married women). Slowly, pieces of a story are revealed. The Spanish Crown thinks the clinic foolish and the revolutionaries believe the doctors to be spies for the Crown. The tragic telling of the clinic’s ruin, as well as the doctors’ return to Europe beg the question, should you be anticipating what’s really going to happen or bracing yourself for a letdown?

There was no letdown for this reader. In the hands of Dobel, the prose shines alone, apart from the plot, which never leaves off, but does take pauses. Neither grandiose nor mundane in style and diction, nearly every sentence is charged with purpose. The plot is a retold excursion of Dr. Real’s to retrieve and admit five new patients from north of Buenos Aires.

There is Prudencio, a young man having descended from neurosis to catatonia, unwilling to leave his bed or unclench his fist. There is an outlandish megalomaniac, Troncoso, whom Dr. Real psychologically picks apart piece by piece for us (“A typical behavior in that type of patient is precisely that air of superiority assumed in the presence of their doctors, and the tactic of coming to see me without notice explicitly to ascertain my cleverness....a fairly standard mode of presentation”). There are the Verde brothers, the older of which speaks the same four words over and over again in different tones, and the younger, who can’t stop imitating every sound he hears. And then there is Sister Teresita, a nun convinced she must have sex with as many men as she can, for it is the divine purpose that has been handed down to her that she explains in her own theological tract.

They must journey back to Buenos Aires from Santa Fe amidst bizarre weather conditions, rumors of attacks from natives, and a massive fire. Among Dr. Real’s band of travelers are characters worthy of Melville’s Pequod, so carefully are they observed. The chief native feared and talked about is Chief Josesito, a man known to carry a violin strapped to his back at all times, and to play it after the massacre of a village.

The Clouds is a novel for both straight-forward readers and those readers with an appetite for the complex. I doubt Saer intended it to be read head-on, but it can be done, and with satisfaction. But for those who like to do some juggling in their reading, Saer left plenty of props. This was my first time reading Saer, and it will not be my last. Though he died in 2005, I don’t think Saer is done with me either.

Mike Sack has lived in Chicago since 2010. He currently resides in Pilsen.