Buenas tardes. My name is José Ángel Navejas, and when I was 19 years old, I broke through the border and eventually materialized in Chicago. Ever since, the Midwest has been home to me. That was about 26 years ago, and if back then someone had told me I would be standing before this audience tonight, I would’ve laughed at them. Not in a million years would I have imagined I’d ever be speaking to an academic audience like this one, in a language not my own and about one of the most pressing problems facing contemporary society—the mass movement of people, a sociopolitical challenge not only for this country, but for the entire world. After all, I had been forced to abandon formal education at 12 years of age for economic reasons, which pretty much meant that I was destined for a life of manual labor. And that is exactly what I had in mind when I tunneled underneath the old rusty fence separating Tijuana and San Diego in the early 1990s. I was following a family tradition—I was disappearing into the endless night of America, just like my uncles and entire generations of working-class Mexicans had before me.

In order to talk to you tonight about my response to the border, first I must share how the idea of the border informed and nourished my childhood imagination. When I was growing up in an otherwise uneventful and impoverished neighborhood in Guadalajara, there was an event that never failed to excite me—the return of the barrio’s prodigal sons. They were always men; their young brown bodies radiating the aura of success. They came home briefly, showing off the plunder from their stints as dishwashers and gardeners and factory workers and heaven knows what else, in a place where apparently everyone did well.

Not that I actually knew what kinds of jobs they did. Nor did I care. In a society deeply obsessed with appearance, what mattered was their glowing presence, their fabulous electronic gadgets, their impossibly white sneakers. Material possessions. For me these men were the very embodiment of success. In a place where stagnation was the norm, it was inevitable that my childhood imagination would pin its hopes and aspirations on the mythological place these men were returning from. Like all other children from my social background, I soon came to conceive of the eventual journey northward as a fact of life.

Throughout the 1980s, I watched fascinated as America’s gravitational power pulled my neighbors north for most of the year and released its grip for brief periods of time: then they would suddenly materialize in sunny Guadalajara, a cheerful flock of migratory birds landing back in their broken nests. I too drank from the cup of promise, of economic growth. One sunny afternoon in 1993, I underwent my rite of passage: a 36-hour bus ride to Tijuana delivered me at the gates of manhood and financial solvency. A desperate people, my neighbors and I, a whole army of under-educated brown bodies, had been summoned by the relentless forces of capitalism in order to satisfy the infinite thirst for cheap labor of this gargantuan economy. How conveniently perverse do the inner designs of the universe turn out to be—to situate the most prosperous economy in human history right next to one of the countries with the highest index of inequality in the entire world just so we can all converge here tonight and talk about it.

But now, more than twenty-six years later, the phenomenon of circular migration—which had allowed my neighbors annual visits to their families—is to be found mainly in history books. The lax border regulations that permitted them to come and go freely (though informally), according to the demand for labor, no longer exist. What exists instead are about 11 million undocumented individuals like me, trapped behind an increasingly militarized border.

The story I am part of is one full of complexities and ironies, a century-long saga, if you only consider the presence of Mexicans in the Illinois region, and almost two centuries, if you consider the American plunder of half of Mexican territory in the middle of the nineteenth century. But this complicated relationship between both nations is not something many Americans like to talk about, either because they choose to ignore it or because it is a difficult conversation to have. So, in order to make sense of us, of the millions of undocumented Mexicans currently living in this country, the ever-active American imaginary relies on a myth of recent invention—the life in the shadows.

As a student of literature, I am fascinated by the myth-making power of America, which seems to permeate every single aspect of its collective life, including its politics and its economy. Because, otherwise, how could you explain to a politician, hungry for sure after giving an exhausting speech on the invisibility and disposability of 11 million individuals, that the vegetables and meats that he is about to eat have been picked and processed by invisible hands? How can you explain to him that those enchiladas and guacamole before him have been carefully prepared by invisible hands and that the waiter serving his dinner, setting it on the table, levitating, as it were, while filling up his glass of water, is nothing more than an illusion?

So, in answering to the border, both to the monstrous structure as well as the oppressive ideology behind it, I have opted to respond in the most simple way—by refusing to be silent. I refuse to buy into the convenient idea that pushes people out of ordinary existence and into a realm of darkness and silence as though, instead of individuals of flesh and blood we were some ghostly image. I refuse to be part of the collective idea that imagines us as nothing more than disposable metaphysical entities, as though we were part of a dream, a fantastic story by Borges and not people with a name and a face and a personal history. I refuse to be silenced, and in doing so I speak against American mythology, against the complicity of all those who would deny people like myself a voice and a place in society. To a country that fancies itself as the greatest democracy on earth, I say that its current political institutions are as obsolete as the most primitive caste system in the world. After all, how else could you explain that even now, in the midst of a refugee crisis and the debate about the renewal of DACA, the political class in Washington does not seem to realize that 11 million people like myself, a population bigger than that of Sweden, and about a third of that of Canada are forced to live in a state of daily uncertainty? I speak against the notion, the fantasy that by simply choosing a democrat to occupy the oval office in the coming presidential elections, the undocumented population will have a friend in the white house. I have seen it. I have lived through it, and in spite of all his charm and eloquence, the policies of the last democrat to occupy such office turned out to be more vicious than those of any of his predecessors.

There is no panacea to the dilemma of the undocumented, the same way that there is no silent legion of shadows. What we have, instead, is a pressing matter the political class of this country is not interested in resolving as long as its industries keep functioning and producing, as long as the Social Security Administration keeps receiving its $13 billion paid annually in taxes by the undocumented. As long as goods and capital can flow freely between Mexico and the US, the border dividing two independent nations that function like one integrated economy, the wall, that monument to political stupidity, will keep expanding. As long as the human element is not factored into this equation, into this perverse transnational phenomenon designed to generate wealth and to regulate and limit the mobility of people like myself, families like mine will continue to be separated for years, for decades, sometimes even for life.

When I was a little boy in Guadalajara, I used to fantasize about coming to this country to work. And I did—one day, I found myself in Chicago as a young adult not knowing a word of English and with nothing more than a ninth-grade education. I had traveled to the Midwest to work, to be employed in menial occupations for years. However, because life is unpredictable and full of ironies, the little boy from a marginal neighborhood in Guadalajara who was forced to abandon formal education at age 12, stands here tonight, just a few months short of receiving a PhD degree from an American university, the highest degree a university can confer. And don’t you find it interesting that that under-educated young man who came here to do manual labor is now an over-educated adult who is not allowed to do intellectual work?

I offer my personal example, unusual as it is, mainly to highlight the ethical and moral dilemmas that employers and even institutions like this will have to face with an increasing number of individuals in a situation similar to mine now that the Supreme Court is debating the renewal of DACA. When the justices reach a decision, it is possible that hundreds of thousands of young college graduates will not be allowed to work professionally anymore, and will have to go back to performing menial jobs. So the decision of people in a position to offer employment will be to either include them and subvert the system, or be complicit with it and perpetuate the status quo.

As I’ve already stated, there is no easy solution to this profound human conundrum. And the reason is that systemic problems can only be corrected by implementing structural changes, which means reimagining society. Let us imagine a different world, a world without borders, a world where the nation-state, just like absolute monarchy, is a thing of the past. Let us have the courage to imagine a time when the value of individual human lives is actually worth more than any mythological symbol or arbitrary barrier that offers a false sense of security, just like indigenous Mexican artist Nicolás de Jesús does in this painting.

In the meantime, let us not be fooled by the illusion that we live in a functional democracy. After all, what is true is that the formation of a caste system sits at the heart of the current political culture of Washington DC. The legal limbo of 11 million individuals can testify to that, and, after a quarter of a century, so can I.

Thank you all so very much for your time. 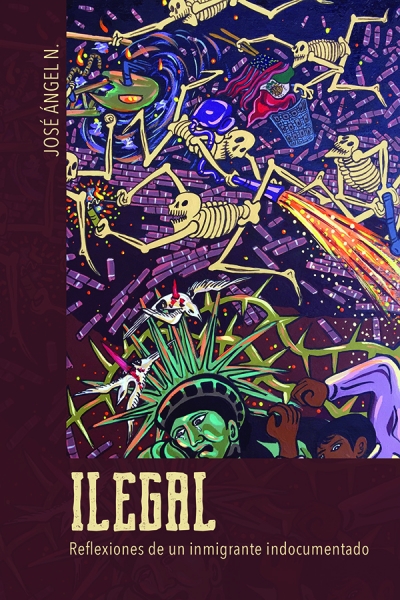