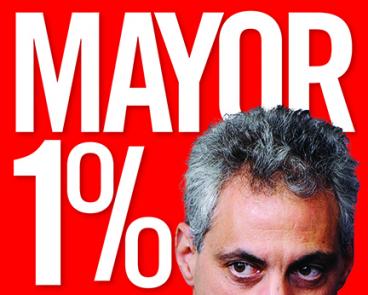 The reader gets a lesson in Chicago politics after reading the controversial, yet appropriately titled, Mayor 1%: Rahm Emanuel and the Rise of Chicago’s 99%. It’s an expose on Emanuel’s career and how he has applied his corporate style to running the “Windy City.” This book was written by Kari Lydersen—journalist, writer and teacher—a San Diego native who moved to Chicago in 1993. It is a well-researched biographical study on Emanuel’s political and corporate life and on how he brought this mindset to Chicago after his election.

Mayor 1%: takes us on a tour of Emanuel’s background from his days “in the Clinton White House and political fundraising,” to becoming an investment banker in the world of mergers and acquisitions. Emanuel ran against progressive Rep. Nancy Kaszak in 2002 for the 5th Congressional District, and won despite the fact that she is a Polish American independent politician known as a true local Chicagoan, and she was leading in the polls throughout much of the campaign. This in contrast with Emanuel, who grew up in the wealthy suburb of Wilmette, was considered an outsider, had an East-Coast liberal arts education, and is really a wealthy conservative in Democratic clothing.

During the Congressional campaign Emanuel received the endorsement of Chicago Mayor Richard M. Daley and other prominent Democrats. His campaign tried to portray him as an average Chicago “Joe” and raised plenty of money to cultivate the image. He also added some of his own money to the campaign chest, which had millions more than Kaszak’s. It became a classic case of an independent running against the “Machine,” and hence the outcome was a foregone conclusion.

After serving six years as Congressman, Emanuel became chief of staff for President Barack Obama. And now he’s back, this time as Mayor after a quick climb up Chicago’s political ladder.

It is quite clear that throughout his life, Emanuel has used his ties to the financial sector for political and personal gain. Tracing his political years with Clinton, his time in the private sector as an investment banker and his years in Congress, Emanuel epitomizes everything a member of the “DLC” (Democratic Leadership Council) should be. That’s the neoliberal wing of the Democratic party that favors privatization and curbing public services. Emanuel’s thoughts on the role of government, welfare reform, free trade agreements, privatizing education and the policies he brought to Chicago upon his election frame him as a conservative Democrat, who will stop at nothing to get his way. In his last year in Congress, he played a key role in the bailout of Wall Street and the big banks. The financial collapse and economic crisis led to calls for Emanuel to resign, from the right and left. That was in part because of new scrutiny on Emanuel’s earlier tenure on the board of the government-backed mortgage broker Freddie Mac.

Lydersen points out that Emanuel served on the Freddie Mac board as the institution carried out financial machinations that would lead to a $3.8 million fine and played a significant role in the mortgage crisis that started the economic meltdown.

Now—as Lydersen documents—Emanuel governs Chicago like it was a private investment firm, one which only answers to the investors that got him elected.

During his mayoral campaign Emanuel stressed school reform, spending cuts, balancing the budget. And once he got voted in these became his priorities—a way to attack public jobs and institutions under the guise of tackling a budget deficit. Despite many protests, public outcry, and sit-ins, Emanuel’s budgets have all been “rubber stamped” by the City Council. Emanuel’s anti-democratic policies have created a grassroots movement against him, stoked by his clash with the Chicago Teachers Union and his closing of almost 50 public schools, while laying off hundreds of teachers and other public workers.

Emanuel claims that he’s going to make Chicago a world city. One may ask for whom? For Chicagoans or for those who want to make money at the expense of its citizens? His attacks on public jobs and unions are making people more aware and ready to stand up to his assaults. Stand up to the man and the 1% he represents, who in his rise to power is destroying public education, mental health care, and the welfare of a city.

In conclusion, after reading this book, one can clearly see that Emanuel’s policies most deeply affect the poor, women, workers and minorities. His school closings might be accurately called “Educational Apartheid” because they mainly affect African American and Latino students as well as teachers.

He’s a reincarnation of the Chicago Machine, but with a free trade mentality that ignores the role labor has played in Chicago’s history. This will hopefully be his downfall, because he’s reinvigorating a pro-labor and grassroots resistance movement that is willing and ready to fight his policies.

By publishing Kari Lydersen’s book, Haymarket Books continues its legacy of printing books that are important economically, politically, and culturally. Mayor 1%: Rahm Emanuel and the Rise of Chicago’s 99% upholds this tradition with flying colors.

Leticia Cortez. Born in México and grew up in Chicago. She worked as a teacher at Truman College. She is a writer, educator and activist who currently lives and teaches in Santa Fe, Nuevo Mexico.