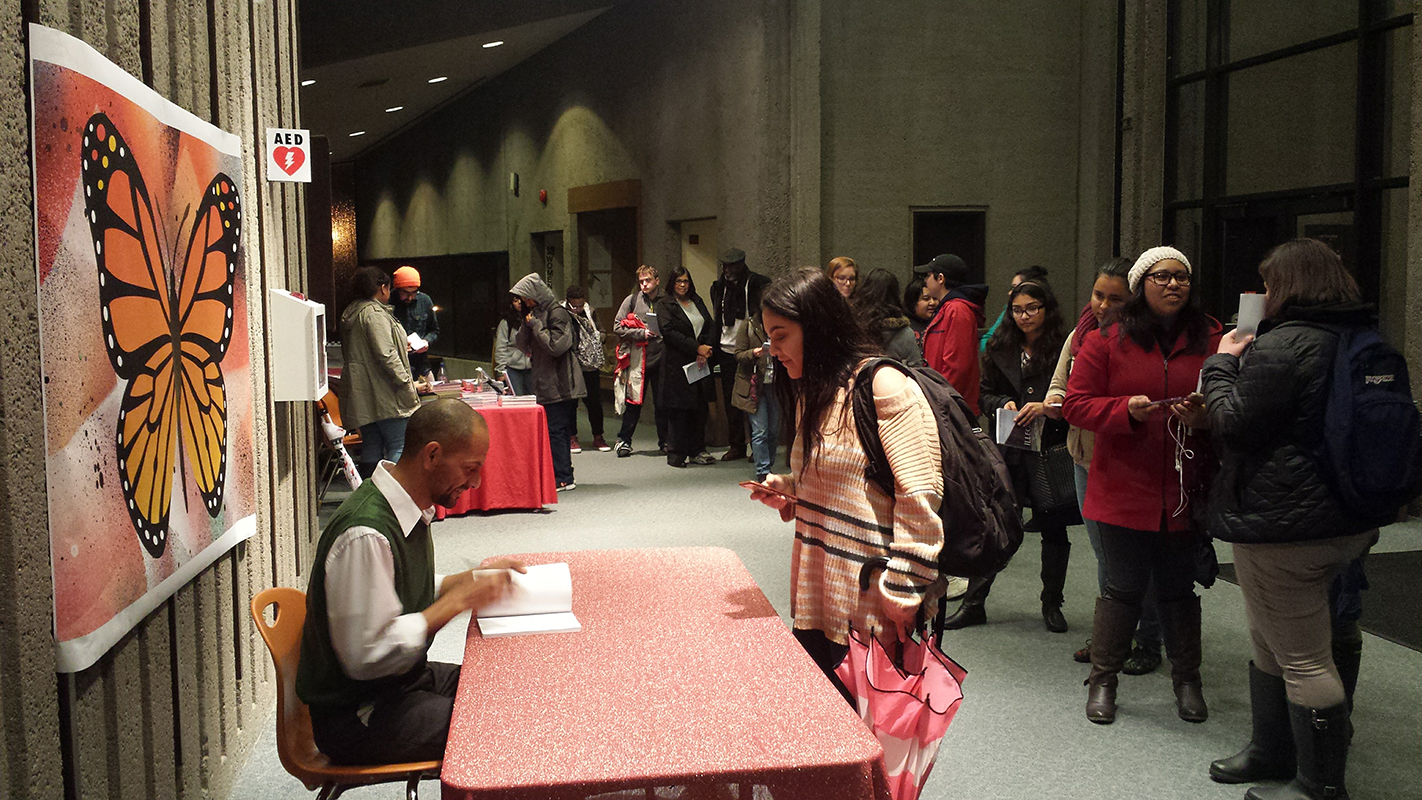 It is a true honor to be here tonight at Cal State University, East Bay. Unlike the spectacle that is about to take place in a couple of days in Washington DC, an event that for many of us feels like a grotesque nightmare, our gathering tonight is in celebration of a noble dream. After 50 years, the vision of Martin Luther King Jr., his desire to see Americans of all creeds and colors united, is slowly becoming a more concrete reality in many parts of the country.

Each afternoon, when I pick up my daughter from the bilingual public school she attends in our small Midwestern town, I see it—a snapshot of the future of this country: white, African-American, Asian, Middle Eastern, and Hispanic children playing happily together. Their present joy is the seed of their future brotherhood. And yet, there are large sectors of society that feel threatened by this richness, by the increasing realization of King’s dream. In particular, the success of the past election was predicated on the promise to tear millions of families apart. It was predicated on the assumption that the undocumented parents of American children have some covert criminal intent. Everyday reality, however, tells us otherwise. It tells us that they are people who cook our meals, clear our tables, pick our vegetables, mow our lawns—they are people like me, trying to make a better life for themselves and their families.

In this respect, we, the undocumented, are no different from any other group of immigrants that has come before us, except that perhaps, to return to the central struggle of Dr. King, what differentiates us is our skin pigmentation.

But that is not the message that we hear in political discourse. The past election was won thanks to a successful appeal to abstract notions of the law, which regard the undocumented not as full human entities but as trespassers and inferior moral beings, as leeches sucking the system dry. This is an easy way for politicians to please their base, by demonizing the work of people earning six or seven dollars an hour. They promise to restore the rule of law by kicking people like me out of the country, knowing full well that their dogmatic interpretation of the law will unleash terror on entire communities. When the law becomes synonymous with inflicting pain on the lives of millions of people who pose no danger to society, then there must be something fundamentally wrong with it. And, as we all know, this country has had its share of such laws.

This is why, in an age when a Twitter account and an arsenal of insults can get a person elected to the highest office in the world, the work of Dr. King is so fundamental—his struggle to make this a better, more inclusive country is something that should not only be celebrated but emulated and carried on by each one of us. That’s why, even though many of us are disheartened, we cannot, we must not give in to apathy, and especially, we must refuse the attitude that seeks to normalize misogyny, racism, and xenophobia in our society.

There are important lessons to be learned in the great resilience of African-American collective history. Let us remember, for instance, that the work of some of the most iconic authors emerged during America’s darkest hours—think of the glorious example of Frederick Douglass, of the philosophical and compassionate genius of W.E.B. DuBois, think of Ralph Ellison and Langston Hughes and Richard Wright and Malcolm X and James Baldwin and all the concentrated spirit that infused the Harlem Renaissance, and you will have reason enough to believe that our best days are still ahead, regardless of how dark the immediate horizon might seem.

It was my happy encounter with those authors that taught me that the success and optimism that characterize this country are not the only story America has to tell. It was thanks to them that I came to understand that our individual narratives, humble as they might be, are just as valuable. And it is with that belief that tonight I’d like to tell you my own story.

A reading of Illegal followed.