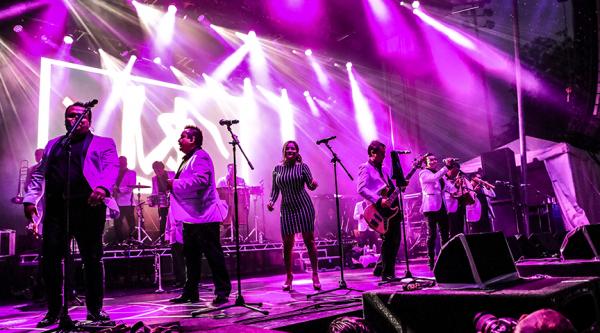 Ruido Fest 2018, A Series of Impressions: the Good, the Bad, and the Sexist

My Take: Less Is More

I found myself reeling at the sense that perhaps the festival hence felt more honest, vulnerable, and real.

delightful with a gray haze,

and the warmth of the enchanted

made for a beautiful and humbling start.

In fact, I think the mud, under the appropriate footwear, made it even better, or had it been the effects of the haze?

Combo Chimbita clearly were the ones who set the tone for the day. 2 Minutos kept the fire going, and Los Ángeles Azules: MESMERIZING. Then came Kinky on stage playing along with The Blue Angels, adding a special touch to a classic.

From the start, Saturday was a lot better in terms of organization. However, I felt there were sound issues around at the most undesirable moments. It became specially annoying with Celso Piña.

On the other hand, Los Marafakas—local Dj set in collab with Rey Lester Irizarry—took the cake! Making their fest debut and gathering the largest crowd for that stage, this bunch had everyone wildly dancing. Did I mention Dread Mar? Dread Mar was so good and got me SO ready for Panteón Rococó…

Then, a tragic set of events.

SEXISTS, THE SCUM OF THE DAY

Perhaps this situation would have made no dent except to devastate me and to scar what otherwise would have been a magical day. But, since it wasn’t unique to me, it happened to others who made it public on Ruido’s event page in social media, where it wasn’t appropriately addressed by the organization, I think it’s worth mentioning.

Scum were assaulting and sexually harassing women while Panteón played. I was one of those affected. It was disgusting, infuriating and devastating.

preying on women at Ruido Fest.

Demoralized, I decided to go home and stay in to mourn the death of an otherwise good day. I said fuck crowds and fuck sorry-ass excuses for men.

As an event organizer, I can’t blame the organization solely for it, but there was an apparent lack of security where victims could go to make a claim. That seemed to change Sunday. Nonetheless, security was, in fact, very thin this year.

Reflecting upon more of this, I see a strong need to implement certain strategies as a fundamental aid in combating and ridding our festivals and events from this shameful, toxic plague:

1. Pushing a message of respect from the stages

3. Guiding procedures on how to denounce acts of aggression

A delicious Sunday, las DESCARTES A KANT stole the show and were my fave of the entire fest! They held us as if at gun point, nos dieron atole con el dedo, and sent us off smelling of them. Everyone else attempting a similar strategy would have felt like a cheap imitation.

Raw, dingy, and in your MUDAFUKEN face!

Remarkable was seeing the organizers out in the crowd, enjoying the music, smiling as if things were running smoothly from that point on.

When Caifanes appreared, I felt so much love —suspiro profundo—. Talking about not giving a shit anymore, dude, Saúl Alfonzo Hernández didn’t even sing! Couldn’t really. But that doesn’t matter! It was Caifanes! WE were singing! WE were in sync. WE were one and in love.

I can still feel it.

All in all, I truly enjoyed it. It felt odd and different: less polished, less pretentious, but—I guess—I really liked that. Gone are the days of thinking of Ruido as this over hyped-up savior of the Latin alternative music of the Midwest. I see it now more of just a great Music Festival. Flaws and all. But Latinx nonetheless, and OURS.

Esmirna García has been light sleeper for most of her short life. She dwells in a mystic world filled of trolls and gentrifyers, and cholos. She likes Cholos.