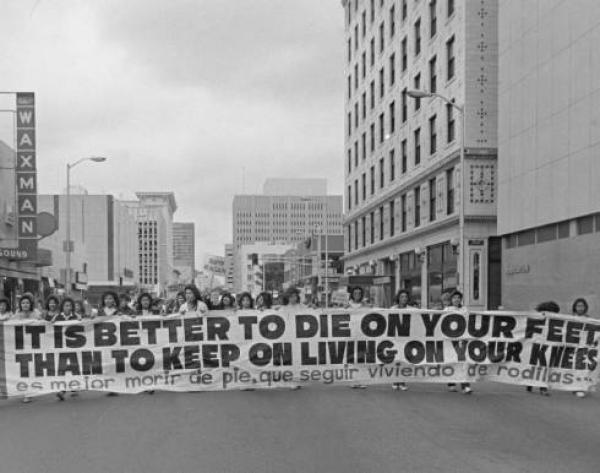 Crusade for Justice in Denver

You remember Armando. He was that skinny Mexican kid from Villa Juárez who lived on Cullerton across the street from DvorakPark. He lived next door to Martha Gómez and her two brothers. Like a lot of families from México, his Dad arrived first. After some time, hisDad brought over the rest of the family—the Mom and the five boys: Gilberto, Armando, Raul, Luis and Arturo.

You remember Armando. He went to Harrison High School with other Mexican kids. Kids like Smiley Rojas, Carlos Heredia, Braulio Gonzales. Like other kids from the hood he bought a car and he and Smiley would cruise up and down 18th Street, crouched low in the seat thinking they were on top of the world.

You remember Armando. He was the Mexican kid who graduated from Harrison High School. He wound up going to Loop College. By coincidence, fate or just luck, Loop College would attract a young group of Latino kids from all over Chicago that would coalesce into The Organization of Latin American Students (OLAS). Kids like Carlos Heredia, Mina Reyes, Ben Pintor, Juan Estrada, Martha Gómez, Omar López, María Vélez, and Ricardo Zavala. Later OLAS would branch out to other schools like St. Mary’s and Harrison High. From there would come Virginia Quiroz and Joel Méndez and María Aguilar and Héctor Gamboa. El Movimiento would make them all friends.

You remember Armando. He was that Mexican kid who from time to time would sit in with his home boys “Los Cometas de Villa Juárez” and play for dances in the basement of Providence of God church. Armando played the guitar.

You remember Armando. He was that Loop College student who went with a group of others students to the Crusade for Justice in Denver to answer a call from Corky Gonzales. That trip transformed the folks who went. They embraced being Chicano. They embraced our culture as something to be proud of. They began to explore our rich and tragic history. Some of the students who went were Puerto Rican. They were inspired as well. All who went were introduced to El Teatro Campesino. They would come back to Chicago with the songs and skits they learned and perform them to others like Jesús Negrete, our troubadour, along with his three sisters Juanita, Santa and Rosa would lead the way playing the songs we learned.

You remember Armando. He was that vato who wound up at the University of Iowa. Yes Iowa. He would go in 1971 along with Ricardo Zavala to Iowa recruited by Ricardo’s brother Antonio Zavalawho had been there since 1968. He would meet other students who were born here but whose parents had come from México or other parts of the southwest. Students like Elisa Sánchez, Donna Olvera and Pete Rael, Rusty Barceló, Rosa Higareda, Mona Camacho and Arturo Ramírez. He studied Sociology.

You remember Armando. He was that vato who graduated from the University of Iowa and went on to study law back in Chicago at DePaul University. He went to law school with Gilbert Galicia and Virginia Martínez.

You remember Armando. He was that lawyer on 26th Street who served the Spanish speaking clients. Are you buying a house? Get Almazán. Have you been in an accident? Get Almazán. He got some lucrative cases that brought him big bucks over an extended time. He called them structured settlements.

You remember Armando. He was that lawyer from 26th Street who married a horse-riding girl from Zacatecas and kept her cloistered in an ivory tower. He had two children: Marisa and Armando Jr.

You remember Armando. He was that lawyer from 26th Street who with his success made new friends. Friends like Hugo and that guy from the Librería Girón. He talked about his trips to Rio de Janeiro and the escapades with las gatas. Living the high life seemed like a dream — A dream that had taken Armando from Cullerton Street to Rio de Janeiro in a cosmic snap of the fingers.

They buried Armando today. The casket was closed at the funeral. In the end, his 135 lb. body was racked with pain from health issues that had lingered for some time. He was mourned by his distraught widow, his family and of course his friends. The ones he made in the 1st third of his life. Friends like Alfredo, Ben, Carlos, Mina, Virginia, Jesús, Braulio, Reggie, Antonio and many others on Facebook. Those of us still around from the early days remember the Mexican kid, the vato, the lawyer, the husband, the father—the friend.

Ben Pintor is a Chicago native who lives in Albuquerque, New Mexico, his ancestral home.  He is a Doctor of Oriental Medicine and practices in the community. He participated in OLAS in Chicago and was active in the Chicano movement.