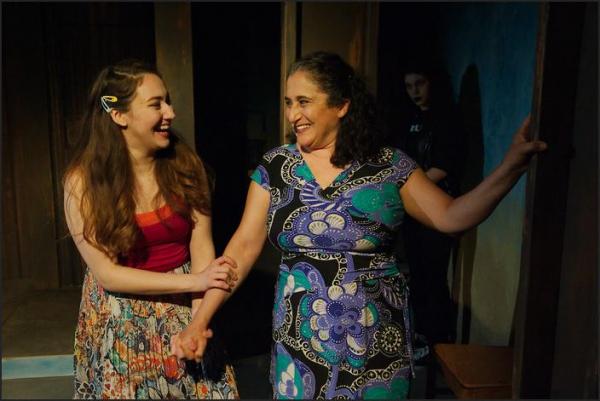 #palnorte: Into the Beautiful North

Into the Beautiful North, based on the book by ‘literary badass’ Luis Alberto Urrea is staged by 16th Street Theater in Berwyn with astonishing results. It’s the story of Nayeli, a 19-year-old living in the town of Tres Camarones in Nayarit, who decides to ‘go north’ in search of seven ‘good hombres’ to help her defend her town after a couple of narcos threaten and rob her and her friends.

Nayeli, delightfully played by the lovely and perky Ilse Zacarias and her two friends, Tacho (Esteban Andres Cruz), a gay cantina owner, and Vampi (Allyse Torres), an emo orphan, are encouraged to go on this crazy adventure by Nayeli’s aunt Irma, the amazing Laura Crotte, who with her charisma and thunderous voice owns the stage every time she sets foot on it.

After watching ‘The Magnificent Seven’ in the town’s movie-theater, Nayeli decides to go to Tijuana and cross the border (illegally) to search for her father — who left her years ago in search of a better future — with the only thing she has from him: a post-card with his address in Kankakee, Illinois. She figures that with his help, she’ll be able to recruit other men to come back to the town and defend it. Aunt Irma gives her money for the trip and instructs her to find Chava, her long, lost love who now lives in San Diego, and will be able to help them. Chava is played by the chameleonic co-director Miguel Nuñez, who convincingly and deftly plays narco, theater-owner, gay man and so many other characters that it’s hard to keep track.

The three friends embark on a journey where they will meet all sorts of good and bad people (Mexican, American and Mexican-American) as they travel the country and run into the melting pot that is America. They will face hate from ‘their people’, as well as kindness from ‘los gringos’, and vice-versa, learning that humanity is what brings people together, regardless of race, nationality or status. Tacho, played by Esteban Andres Cruz is a treat to watch with his flashy clothes and sweet disposition.

Into the Beautiful North is a brilliantly staged, modern story. Despite the grimness of the situation, Karen Zacarias has turned what could be portrayed as a tragedy into a comedy that keeps the audience wondering if they’re about to laugh or to gasp. The show features a quick-witted dialogue full of pop-culture references, sometimes bringing Kanye West’s music to the background, sometimes Jack Sparrow in Nayeli’s dreams, and sometimes using franchise products to describe what most towns look like in America. I won’t spoil the ending, however, I will say that Nayeli’s dream of bringing back the men is also the men’s dream. The dream of most immigrants.

The ensemble cast plays many different characters, however, the most endearing is Atomiko (Brandon Rivera), a young man they encounter in a dumpster with a Hello Kitty backpack and a broom stick who vows to protect the trio with those weapons at hand.

Into the Beautiful North is a must see. Do not miss the opportunity to watch these magnificent actors in a meaningful, sometimes funny, sometimes sad, but always triumphant story about pursuing your dreams, as an immigrant, as a woman, as a gay man, as an orphan or as Atomiko. See it now, for only 22.00 dollars, because I bet that next year, you’ll have to pay 100.00 to see it at The Goodman.

Carolina Herrera. Born in Monterrey, Nuevo León and was raised in México City. She graduated from Universidad Regiomontana (1989) with a Juris Doctor. She was appointed to the Mexican Foreign Service at the Consulate General of Chicago (1991-1997) and Houston (1997-2000) as representative of IMSS (the largest public health-care institution in Mexico). Since 2001, she has worked as a translator, interpreter and interpreter trainer. She is member of El BeiSMan Editorial Board. She lives in Aurora, Illinois with her children and Chester, her dog. #Mujer que piensa, her first novel, was published this year. Follow her on Twitter @blondieflowers