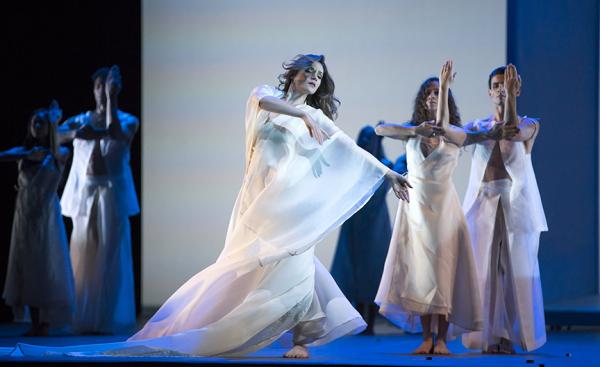 Orphée et Eurydice: A New Journey for Lyric Opera and the Joffrey Ballet

Christoph Willibald Gluck’s (Parisian version) of Orphée et Eurydice at the general disposal of director and choreographer John Neumeier has made quite an impression on Chicago’s opera lovers. I feel very confident to say that the main reason is the incorporation of the Joffrey Ballet as an all-encompassing element of the production. Unlike other operas where ballet pieces are introduced as incidental or as accompaniment, the dancers of the Joffrey Ballet play essential parts in this reenactment of Orpheus’ journey to Hades. Different ensembles of dancers play the furies and the three-headed Cerberus; but most importantly, there are sets of doubles representing Orpheus and Eurydice. These doubles, masterfully choreographed personas, come to life on the stage as manifestations of the loss, grief, and anguish suffered by the unfortunate lovers.

Crucial disciplines come into play in this coproduction of Lyric Opera of Chicago, Los Angeles Opera, and Staatsoper Hamburg: good acting, impressive singing, and a splendid performance by Joffrey Ballet, a troupe of young dancers making its second appearance at the Lyric. These disciplines combine quite timely to create a work that will undoubtedly establish a new precedent in Chicago’s operatic scene*.

As it appears to be the norm at the Lyric, director John Neumeier amended the mythical classic by staging it in a contemporary setting. The key factor in making the stage play more engaging to a contemporary audience was the insertion of a play within a play, a formal device that befits the complementary roles of the main singers and the all-encompassing presence of the dancers. As in Carlos Saura’s film Carmen (and its troupe of flamenco dancers), the dance coach (Orphée) and his students are reliving a myth in the very studio where they rehearse. Eurydice, the prima ballerina and Orphée’s wife, in a fit of anger, makes a scene, runs out of the studio to the street, and gets killed by a car (offstage). Rehearsal continues at the studio, but Orphée gets a phone call with the devastating news.

It is at this point in the story when one is to consider Derrida’s assertion that man does not create myths, but myths create man. Orphée, played by Russian tenor Dmitry Korchak, is so crushed by the death of Eurydice that he soon falls into a sort of livid, dissociative fugue and begins his journey through Hades. The once mythical lyre player is now a desperate choreographer lost in the Underworld, searching for his adored Eurydice, played by the graceful Canadian soprano Andriana Chuchman. But Orphée’s journey to Hades, conceived in the-now as an altered-state of consciousness—an episode of madness caused by grief and love—can only occur by the intervention of Amour (Cupid), very casually acted by American soprano Lauren Snouffer. Love is the underlying doer and perhaps even the culprit. In a brief interview in Lyric magazine, Nuemeier hints that perhaps Amour is in love with Orphée. In the original myth, Orpheus’ lyre music enchanted anyone who heard it. The furies fell in love with his music, or him, and helped him find Eurydice; and Cerberus, tamed by the music, allowed him to the underworld. Neumeier’s orphic hero is a choreographer, so he simply uses his personal charm. As a condition set by Amour for him to regain Eurydice, Orphée is not to look back at her, or she will die again, which is exactly what happens.

Gluck’s phenomenal musical accomplishment of “beautiful simplicity” as he called it, rises from the pit, where the chorus makes its presence heard. The music is sublime though the action be otherwise. Although Gluck’s music, cautiously restrained and impassionate, does not include the expected sentimental arias of the Italian styles to accompany love scenes or the pangs of death, it was the acting and the choreography that manifested the heart-wrenching emotions suffered by the lovers. In Act I, after the death of Eurydice, the doubles cling to and fling from each other’s bodies in painful contortions. Eurydice’s death and passage to the underworld is the high-time of the entire opera. The choreography was both poignant and mesmerizing. The doubles, technically gifted as they are, were not just arming and disarming the pains of loss and grief; they were also acting, expressing the terrible pain with their disjointing limbs and contorting bodies. Passion was in play and it was director John Neumeier’s contribution.

Another highlight of this production is in Act II, when Eurydice and Orpheus find each other in Elysium. An effective and well-synchronized play of dimensions by John Neumeier, who also reigns as set designer, as he employs actual character dancers, the shadows, dressed in black, as kuroko stagehands, to arrange and rearrange the moving inclined platforms (mirrored Elysian dimensions, possibly influenced by the German expressionist films of the silent era), where the lovers seem to be confined. I hate to say it but, in contrast to the alluring effect of the moving platforms where the lovers appear and disappear, I cannot understand how Neumeier allowed embarrassing himself and the Lyric with such child-like, plastered drawings of Orphée’s bedroom and the tree and bench of the here-world. Another Neumeier addition to the story is the painting of the Isle of the Dead, a leitmotif, and the theme of the grieving choreographer’s ballet production. I first thought that perhaps it was a shout-out not so much to Arnold Böcklin but to Rachmaninoff’s symphonic poem. However, it does allude, as another metaphor, to the Underworld.

A special mention should be made about the superb cast. As I enjoyed the performance of the three main singers (Dmitry Korchak, Andriana Chuchman, and Lauren Snouffer), it did not occur to me to think of credibility or verisimilitude, because I was too involved, captivated by Dmitry Korchak’s magnificent singing and the good acting of both Andriana Chuchman and Lauren Snouffer. Love (Amour) definitely made its presence at the Lyric. Lauren Snouffer convincingly enacted shock, grief, affliction and a final glare of joy or satisfaction. Unlike Dmitry Korchak and Andriana Chuchman who essentially manifested grief and anguish, respectively, Lauren Snouffer, because of her ever-presence on the stage, appeared more versatile. Neumeier introduced passionate love into the existence of these tragic archetypes. Amour never leaves Orphée’s side.

Gluck’s original intention of making the art of opera more accessible was quite an accomplishment and the efforts to modernize were taken further on that path by innovators like Mozart. John Neumeier’s sole effort to make Orphée and Eurydice more palatable to current taste may have taken a different approach though, that of a director/choreographer/set designer/lighting designer with way too much on his palette. However, I suspect Lyric Opera rather than keeping the classics classic, lately settles for facile contemporary settings to represent ancient themes. Although somewhat fitting, considering the big part of the ballet, inserting Orphée’s tragedy in a dance studio and making him a choreographer may be just too convenient. But the reforms started far back when Gluck was still composing. The myth was thenn the stage altered to please Parisian audiences and the furies bring Eurydice back to life, something that never happens in the original myth. Neumeier replaced the miserable Orpheus who never regains Eurydice with a man who finds solace in love and art, an imaginary yet sublime troupe of dancers. This was Amour’s final mending of his torn heart.

The two high masts of this production were the Joffrey Ballet and Dmitry Korchak’s truly impressive performance. To be able to sing for so long, the first two acts entirely, and to still have the texture, the fullness, and richness of voice, makes Korchak one of the best light tenors. It was a tour de force. At the end of act III, I noticed Dmitry was gasping for air as he came out on stage to salute the applauding audience. He received a standing ovation. The young dancers of the Joffrey Ballet and Korchak’s performance was the big plus. Two artistic forces complementing and disputing emotions in the hearts of all who witnessed a myth coming to life; for it was a mythical moment at the Lyric, and that is the purpose of art, to engage and to make the spectator part of the story.

Note: *This production of Orphée et Eurydice will be recorded for television and broadcasted by PBS in 2018. Also, as of 2020 the Joffrey Ballet will be an integral part of Lyric Opera of Chicago.

Orphée and Eurydice will continue to be performed at the Lyric Opera of Chicago on the following dates: October 6, 9, 12, and 15.