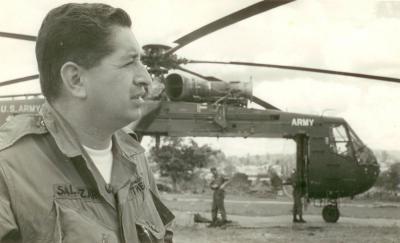 Ruben Salazar, perhaps the best known Chicano journalist of the last half of the 20th Century, was a man caught in the middle of opposing forces suggests a new documentary to be shown on April 29 on PBS.

Directed by Phillip Rodriguez, the documentary Ruben Salazar: Man in the Middle contains never before seen footage and interviews with family, friends and colleagues of Salazar who was killed during the anti-war Chicano Moratorium in East Los Angeles on August 29, 1970.

“He got caught up in a time of social change and it altered his project and his life and it impacted the way he died,” said Rodriguez during a telephone interview.

While taking a break from covering the 30,000-strong protest for KMEX-TV, Salazar was struck in the head at the Silver Dollar Café by a tear gas projectile fired by a Los Angeles County deputy sheriff.

The deputy, seen here on camera, was never charged but the documentary suggests that Salazar had made prior comments to a friend that he was being tailed or followed.

After his death Salazar became a national martyr for Mexican Americans, a role Salazar would have rejected, says Rodriguez.

“The Chicanos saw him as a martyr because they needed one but I am not sure Ruben would have agreed with that characterization,” said Rodriguez, “He was not an activist, he was a journalist, he was an observer with an opinion, and I don’t think he was looking to die.”

Former Chicano activists, Latino journalists and historians will find this documentary interesting in that it gives a new angle to the story of Salazar, who was born in Ciudad Juarez in 1928 and grew up in El Paso, Texas.

After a stint in the military service, Salazar joined the El Paso Herald Post as a young cub reporter where he honed his journalistic skills. While working there Salazar made himself get arrested on a drunken charge in order to expose conditions then at the El Paso County Jail. His story made the front page.

By the start of the 1960s Salazar had moved to California where he landed a job at the prestigious Los Angeles Times. As the only Mexican reporter at a work place with close to one hundred writers and reporters, Salazar fought his way up the ladder of the newspaper.

Years later he became a Vietnam War correspondent and later also covered the Dominican Republic before becoming the Mexico City bureau chief for the LA Times.

But soon the black and brown rebellion of the 1960s caught everyone by surprise and Salazar was called back to Los Angeles to help his newspaper explain the Chicano uprising known as the Chicano Movement.

At the height of his career, he left the LA Times to become news director of KMEX-TV, a Spanish-language station, while remaining a part-time columnist for the LA Times.

It was during this time that he gave voice to the dreams, aspirations and struggles of the Chicanos of East Los Angeles and also caught the attention of the police who were not used to having a mainstream journalist raise issues and concerns about how they dealt with this minority group.

“One could argue that Ruben crossed the line as a journalist but again you have to remember that he was doing what others were doing which was becoming more swept up in the ideology and ferment of the period which was one of discontent and challenge to authority,” said Rodriguez.

By all standards, says the documentary, Salazar was already a successful professional who had all the status symbols of white society. He had married an Anglo woman and lived with his family in an affluent white suburb of Los Angeles.

However, it appears that his close contact with the East Los Angeles barrio and the many issues then affecting Mexican Americans may have led him to become a spokesman, not a distant observer of the Chicano Movement. He was caught between the Chicano militants who distrusted him at first and the power structure who was irritated by his news reports.

In the aftermath of his death (accidental or otherwise), he became a Chicano martyr something that is still evident today by the large number of schools, parks and streets that bear his name. One school in Chicago is named after him.

Mark it down on your calendar. Check local listings for the time.