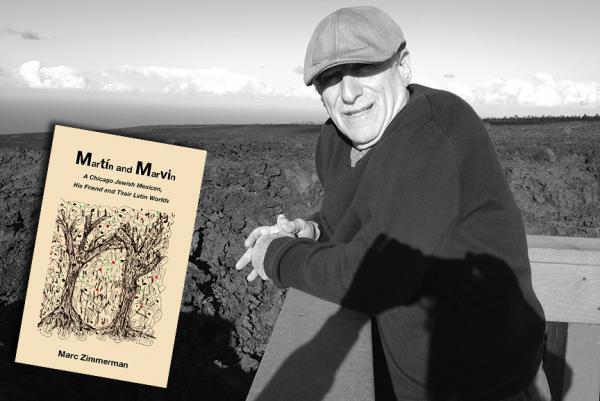 Martín and Marvin: A Chicago Jewish Mexican, His Friend and Their Latin Worlds, the new book by Marc Zimmerman, is a story of frustration, identity, friendship, misunderstandings and, to a certain degree, redemption. But most importantly, since it claims to be the story about a Mexican in Chicago, we should clarify that this novel resembles little or nothing of the lives of the Mexican population of the city we have been reading about for the last few years. At least not the way the Mexican migrant is portrayed in the fiction and chronicles of authors like Raúl Dorantes and Febronio Zatarain, whose respective works focus on the everyday lives of working-class Mexicans. Martín Klein, a Mexican Jew settled in Chicago, does not share in that world, and that, one could infer, is part of his many frustrations. But then, who would want to step into the shoes of the disadvantaged when privilege and wealth are at hand?

About Martín, his friend Marvin — who is also the main narrator of the book — says that he was “a non Jewish Jew…with a cosmopolitan eye.” This he says as part of the eulogy for his departed friend. Martín’s unexpected death gives his friend the opportunity to let out a series of complaints that had been boiling inside him for a long time. He laments, for instance, that Martín died in peace, without any sign of suffering, when so many others do suffer; yes, he should have suffered, both for allowing himself to gain so much weight and for neglecting his own health in spite of being a doctor, and for basically being an asshole to everyone around him.

Before dying, Martín maintains a troubled relationship with his friend, but especially with himself. Martín is a highly unsatisfied individual. He has left a successful medical practice in a wealthy north suburb of Chicago and resettled in a humble Mexican neighborhood in the city. This gives the impression that his decision was motivated by altruistic impulses, but nothing could be further from the truth. In reality, Martín is fleeing from his background. He resents his upbringing, the career he was forced to study, the niceties of the patients he served in a country he only half considers his own. But, most importantly, he is frustrated by the fact that he can’t exclusively pursue drawing, reading and writing, which apparently are his true passions.

Martín’s artistic inclination, in turn, is the main point of tension with his friend Marvin, who resents Martín’s creative side and his liberty to read and make literary connections that the latter, as a literature professor, has not even thought of. Another point of contention is his luck with women, which Marvin envies, but not nearly as much as he despises Martín’s stinginess, his unwillingness to foot the bill even for the dates that sweeten his otherwise bitter life.

Even though Zimmerman’s novella revolves mainly around the tense relationship and existential feud between the friends, there are also moments of a heightened social consciousness that I would have liked to see more of. For instance, the incredible moment when a working-class Mexican-American woman finds herself uneasy ata gathering of cosmopolitan intellectuals in Chicago. One of those present goes on and on for hours trying to explain what Mexico, his country, is all about. Sensing that his fancy speech is nothing more than abstract notions that do not reflect her values or her background, Mercedes reacts, accusing Mexican intellectuals of being nothing than a bunch of “shit-eating” elitists who know nothing of life, illustrating thus the inequality and class resentment that have plagued Mexican society for centuries. And as though resentment itself were not quite enough, she further adds, in an overtly racist remark that “yo sí soy mexicana, yo sí sé qué es ser mexicana de verdad.”

Another memorable moment occurs when Marvin’s wife, while vacationing with him and their peculiar friend, explains to her husband why she was delayed with Martín, saying that, while Marvin waited in line for hours, his friend “had to go here and there and then he had to piss or shit or whatever, and then sit and eat so he could piss or shit all over again.” That such scene would occur in no other place than the Vatican makes one think of Martín as an itinerant and comical version of the mythical Roman senators of yore, who would puke all they had just eaten so they could eat and puke again.

Although Martín and Marvin… gives one the impression that this is a book deeply obsessed with the topic of identity, only in the end does one realize that the contrary might be the case. Toward the end of the book, one senses that, for Marvin, the narrator, identity has become a burden, and that neither his marriage to a Latina nor the sanctity of a synagogue are safe places for a soul in search of true individual meaning. In a narrative that comes full circle only on its very last page, Marvin, blessed by the wisdom of old age, realizes that identity is nothing but a fallacy, and that Jewish-Mexican, Jewish-Puerto Rican, Mexican, and Mexican-American are nothing but arbitrary labels imposed on us and that we are often made to wrestle with mindlessly. Or at least that is what the poetic imagery, philosophical depth, and the redemptive tone of the ending of Martín and Marvin… seem to suggest.