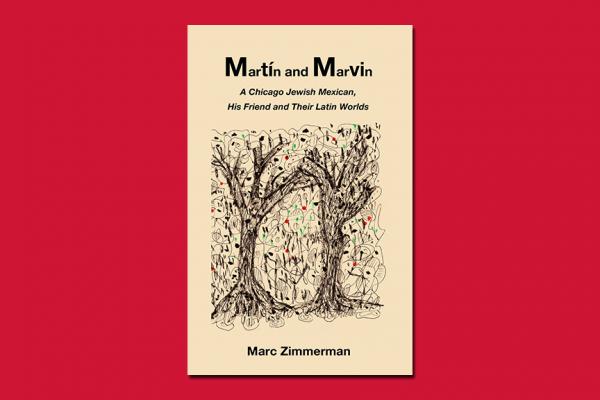 Martin and Marvin, a book by Marc Zimmerman, professor emeritus of Latin American and Latino Studies at the University of Illinois in Chicago (UIC) as well as World Cultures and Literatures at the University of Houston, is a saga of a friendship between two men and the confidence they place on each other but also the friction and rivalry that develops among the two.

Martin is a doctor of Mexican Jewish background born in Mexico City and Marvin is a professor of Jewish descent born in California. Both live in Chicago.

But while Marvin leads a rather sedate but interesting life in the world of academe teaching literature, Martin lives in the fast lane conquering many women with his manners and worldly outlook.

Both men are eventually introduced to each other in Chicago and alas, as Shakespeare would write, there develops an almost mutual admiration society that has hidden psychological nuances that almost turn into open warfare.

Most entertaining of all is the chapter “Martin in Italy” in which Marvin and his Puerto Rican wife invite Martin to travel along to see different cities in Italy. What promises to be the sightseeing adventure of a lifetime soon turns into squabbling over schedules, the rendezvous points to meet for meals and haggling over whom leaves the tip and more. In one memorable scene, Martin and Marvin’s wife walk away and leave Marvin waiting in line to see the Vatican’s interior while Marvin and Martin’s wife sit it out in a café.

After Martin’s rude manners over a shared sandwich surface, Marvin’s wife goes back to where Marvin in saving their place in line.

All along the book, Martin, the MD, fills his time with his medical practice and meeting women. He also wants to write and paint but it leaves him little time, and motivation for this, something that angers Marvin, his friend.

Well written and entertaining this book by Zimmerman, an expert on Latino literature, is the narrative of a long lasting friendship among both characters that only ends when Martin passes away.

Martin and Marvin, the book, is homegrown literature that gives the readers a sense of time and place of how Latinos related in Chicago in the 1970s and 1980s.

While this book shows scenes of riffs among the two friends it is a saga of real friendship among tow men who share more than coffee at local eateries in Chicago. The two are the loyal friends we all wished we had in our often busy but at times lonely lives.

To obtain a copy of this highly interesting book, go to Amazon.com or for a discount, send $12.00 through PAYAL to mzimmerman@uh.edu. The book will soon be available also at City Lit in Logan Square and The Pilsen OutPost.