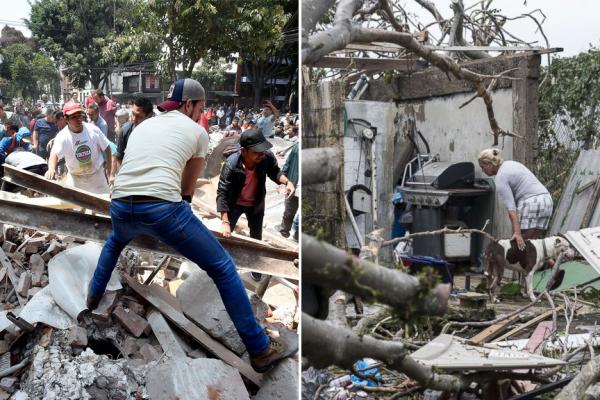 Mexican and Puerto Rican leaders have come together to help the victims of the 7.1 magnitude earthquake in Mexico and the devastation left behind after hurricane María in Puerto Rico.

Members of the National Museum of Mexican Art (NMMA) and the Puerto Rico Arts Alliance (PRAA) announced last Wednesday that they have created a relief fund for victims of both the earthquake in Mexico and the category 5 hurricane that passed over Puerto Rico which left the island with widespread damage.

“The creation of a Chicago for Mexico and Puerto Rico Relief Fund is an important event for us,” said Carlos Tortolero, president of NMMA in Pilsen during a press conference.

Tortolero said they created the relief fund after many people called and sent emails asking where they could donate funds to help the victims of the hurricane and the earthquake.

Juan Méndez, the chairman of the Board of Directors of the PRAA, said “This is a tragic day for us, we (Mexicans and Puerto Ricans) are a family and will always be a family.”

Méndez, who said he has family both in México and Puerto Rico, said “Puerto Rico is an island and if its infrastructure is not taken care of, it will cause more tragedy.”

The relief fund will be created with the cooperation of Wintrust Bank, located at 1800 S. Blue Island Avenue, in Pilsen.

Carlos Cárdenas, the chairman of the Board of Trustees of the NMMA and who is also affiliated with Wintrust Bank, said Wintrust Bank will make a $5,000 donation to this relief effort.

Cárdenas said the impact of the earthquake in México has impacted people as far away as Chicago.

“We are awe-struck by this tragedy in México City, Morelos, Puebla and the state of México,” said Cárdenas, “There has been a lot of loss of life and we have families in both countries.”

Cárdenas and the other leaders said the relief funds will be channeled through the Cruz Roja Mexicana in México and the Puerto Rico Red Cross.

People who want to donate to the relief fund can do so at the following places:

Donors should visit each location in person and bring in donations in check form only. Donors are instructed to make the checks out to: National Museum of Mexican Art with Chicago for Mexico & Puerto Rico Relief Fund written on the memo line.

Donations with a credit card can be made online at:  WWW.NationalMuseumofMexicanArt.org/relief.