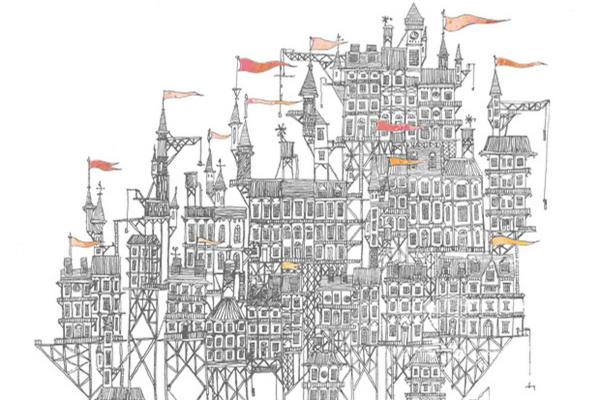 Invisible Cities: How Do We Begin To imagine?

Two men sit. Marco Polo navigates the world of the cities he’s seen and imagines. Kublai Khan listens and imagines. Marco Polo describes his travels, naming the places he’s been to. From Cities of Memory, Cities of Desire, Cities of Eyes, of Signs, Trading Cities, Cities & Eyes, Thin Cities, Cities and the Dead, Cities and Names, Cities and Sky, to the Continuous Cities and finally arrives at the ones that are hiding. Through his words he reveals the Hidden Cities, as well as each city from Diomira to Berenice making them come alive. The cities are a succession of each other, yet are one and the same. The inhabitants, the surroundings, the history of each place are animated as the navigator narrates, and the other listens.

The cities’ names flow through the reader’s mind, but it’s the descriptions of these places that give existence to the names. At what point do these places become one? It does so at each turn the conversation between these human beings takes.

When do the invisible cities become visible, not only to Kublai Khan, but to the reader? They do so as one follows the thread of the conversation and imagines.

And as Marco Polo puts it so well: “I speak and speak, but the listener retains only the words he is expecting.” In other words, it is the ear that commands the stories.

Italo Calvino’s book Invisible Citiesis a rare treasure because it delineates these areas giving them shape and visibility. So whether it’s one city or many, each of them is part of this world that he creates through his words. The same words that are carried in a conversation between Kublai Khan and Marco Polo. This is when we arrive at the point where language becomes the bridge of communication and imagination. So in order to join Marco and Khan in this journey, start reading Calvino’s book, join in the conversation and visualize his world.

Leticia Cortez is a teacher, writer, loves film. She was born in Mexico, grew up in Chicago and has travelled the art world. She presently teaches Latin American Literature at St. Augustine College.