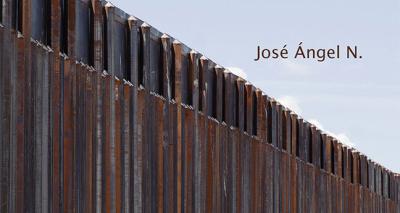 The University of Illinois Press just published Illegal by José Ángel N. This is the life story of a young undocumented immigrant and his ambitious drive to control his intellectual development. The following excerpt was granted exclusively for El BeiSMan by the publisher.

My life in the shadows began some seventeen years ago. It was a hot April night in Tijuana, that border siren that lures both migrant and tourist with promises of boundless prosperity and unchecked lust. That night I joined a numerous army, an anonymous army. Under the infinite depth of night and guided by a sneaky coyote, we moved, slowly descending the slopes flattened nightly by the illicit weight of millions of other shadows who preceded us. Denied a legitimate chance at the American Dream, what better way to attain it than by penetrating America by night?

There were precedents in my family. Besides a brigade of distant relatives too large to count, two of my maternal uncles had already been to the States. By the time my turn to leave Mexico came, both of them had been back in Guadalajara for almost ten years. Their venture had been a failure, for now they were as broke as they were before leaving. My departure being rushed, we didn’t really get a chance to talk about the experience of crossing. So upon leaving, the idea I had of what awaited me was that which I had pieced together overhearing their conversations. If my journey was to resemble theirs, then my trip across the border would be pretty tight and bumpy but safe—I’d be packed, like a sardine, in the trunk of a car among many others. (If things went badly, I’d have to climb over my fellow riders, kick them and push them down as I gasped for the last drops of oxygen, but that was unlikely.) However, reaching my destination safely and quickly was guaranteed. All arrangements had been made ahead of time by a distant relative who had agreed to finance my crossing and hired the reliable services of a reputable coyote.

Thus, after tunneling under that tall, rusty iron curtain that divides both countries, I was surprised. There were no cars waiting. I stood up, dusted off my pants, and looked at the horizon—a dark, endless stretch of hills and valleys appeared before me. I had made the journey with an experienced cousin from Zacatecas whom I had never met before and who didn’t bother to inform me of what the crossing would be like. Now, after a ridiculous crawl, I had reached the United States, and I wasn’t turning back. I’d follow the coyote’s trail.

The stretch between Tijuana and San Diego is long. Very long. And it is as treacherous as it is beautiful. It is unlikely that anybody who has ever crossed it will easily forget it. Its desertlike landscape is bound to carve itself equally onto body and soul. Once this turf is trodden, the tiredness, the awe, and the terror experienced along these trails become permanent memories. Some take away a cactus scratch that eventually scars. Others momentarily succumb to the sheer magnitude of the heavens, the number of stars, the depth of night. A few are left behind to join the landscape.

This dark wonder. For many, like myself, this arid world, these steep hills and deep valleys, provides us with our first hike ever. It is also our first view of such broad sky. Our first communion with the infinite. It was probably under pristine and glittering skies like these that Immanuel Kant, bewildered, conceived his mystical dialectic between the starry heavens above and the moral law within. I, lacking all philosophical insight at the time, simply wanted to pause and contemplate this fragment of galaxy. But the coyote had other plans, and we kept pressing forward.

Human industry adds its own accents to the native landscape. From the top of a hill, we watch a long line of people advancing hurriedly in the valley ahead of us. Some two hundred years earlier, pushing westward in this very spot, they would have been considered pioneers. But the journey they have embarked on came too late, and they are not heading west but north, and that alone is their disadvantage and their loss. Or, if they were in other latitudes and times, based on the determination and enthusiasm that fuel their march, one would be inclined to think of them as troops or pilgrims. But here, they are simply shadows.

Suddenly, from a neighboring hill, a series of lights turns on simultaneously. Some come from trucks parked at ground level. Others descend, flickering rapidly like a furious shower of shooting stars. For those unfortunate souls, this is as far as the American Dream will go.

Way up on top, we duck and hide. We wait.

How long we spend perched on top of that hill afterward I can’t tell. Before the incident below, I reckon we have been going for more than an hour. All I know is I’m glad we stopped. A smoker at the time, I feel dizzy, my lungs are swelling, my nostrils flare rapidly, my legs are getting heavier, and I am drenched in sweat. The coyote squats and hisses at us not to move, gesticulating violently and pointing to the ground with his right hand.

I land on my stomach and crawl my way into a narrow space between a big rock and a thorny bush. The backpack in which I carry a change of clothes, a bottle of water, and some snacks is wet with sweat, and I feel a pointy rock stabbing me right in the stomach, but remain motionless. I am panting heavily and fear that my breathing will attract a rattlesnake. A few minutes pass, and someone close by begins to snore. I keep my eyes open…

To read the review by Brandon P. Bisbey, press the link: Come Out Into the Sun.

Illegal is available now from Amazon and the Book Cellar. Marco Antonio Escalante, author of Malabarismos del tedio, and Julio Rangel, editor at Contratiempo magazine, will present Illegal at the Book Cellar on March 15, 7:00pm.