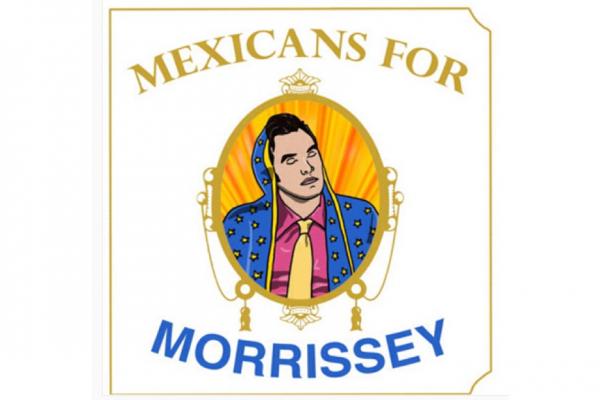 My boy Chuy picks on me for liking The Smiths. “White savior shit,” he said to me when I was wearing my Smiths shirt—the one with Marr, Joyce and Rourke standing behind a glasses-wearing Morrissey. He says that about me and the whole Chicano craze for them. “Y’all are fucked up,” he says, “Same muthafuckers claiming Aztlán got a British god.” I don’t think he’s wrong. There’s something undeniably strange about brown people’s unconditional love for some white dude from the UK—to dress like him, do their hair like him, wear him on a shirt like some kind of Ché. But I don’t think love for Morrissey and The Smiths has anything to do with Morrissey or The Smiths. I made my case to Chuy with the following examples:

1) The Smiths Copied a Spanish Band

The first time I heard The Smiths, it wasn’t The Smiths. It was Duncan Dhu’s lead singer, Mikel Erentxun, doing a spanish cover of “There’s a Light That Will Never Go Out.” My brother had it in a Rock en español mix-tape he bought at Swap-O-Rama. I loved it. He loved it. We rewound it every time it ended. Erentxun sang it like he wrote it, like it was his. So, when I heard The Smiths’ original version, I told my brother, “There’s this band out there that is copying the Duncan Dhu guy.” My brother laughed and broke it to me. “It’s theirs,” he said, “it’s a song by The Smiths.” I didn’t ask anything more about it. All I could think was that the one I thought was the original, the spanish Erentxun version, sounded better.

Sounded better because of the Spanish lyrics. At the time, most of the Spanish we spoke was limited to communicating with our parents, talking shit to each other and using it as code in front of non-Spanish speaking folks. But we rarely used Spanish to express love or lack of love. Singing that song was one of the first opportunities to do that, and to do it in a dark almost creepy way and it be okay. To say, “morir por ti sería un lento y bello final,” felt so damn good, so damn right.

2) The Smiths Got Me An Apartment

When I moved to California, I didn’t know anyone. However, I did know The Smiths. And because of them, I got a great apartment with cheap rent. I was couch surfing for a while, until meeting a Chicano Angeleno who said he had an extra room. But he was doubtful of me. Years later, he told me he wouldn’t have given me the room if I hadn’t mentioned The Smiths. I was too young, he said, and that my fauxhawk was a sign of immaturity. As soon as I mentioned The Smiths’ he said that he felt like I could be trusted me. “Sensibilities,” he said, “If you like The Smiths, you got feelings. And that’s rare.”

I’ve never seen Morrissey live. I don’t have to. I don’t want to, mostly because I don’t need to. I’ve experienced their music in powerful ways without having to see them.

The first time I realized that was in Fresno, California. I went with my roommate to see the The Sweet & Tender Hooligans—a cover band from LA, led by Chicano Angeleno, José Maldonado. That night, most of the people in the crowd were cholo looking dudes. They were tatted up, had shaved heads, avoided eye contact with each other, and drank back beers by themselves before the show started. One cholo, warned me to watch out with his shoes after I accidentally stepped on them. Shit was a little tense for a Smiths/Morrissey tribute band. But by three songs in, most of the cholos started taking their shirts off and singing with each other. They got in each other’s faces with Morrissey lyrics, singing along with José Maldonado, their arms around each other’s naked backs. And the Cholo that warned me about stepping on his shoes, poured a stream of beer into my mouth.

I was there with friends on one of those Saturdays that draws mostly Latinxs—when they play mostly bands like Depeche Mode, The Cure, Pet Shop Boys, and yes, The Smiths and Morrissey.

At one point, while waiting to get drinks, Morrissey’s “Suedehead” came on and my friend Rosa grabbed my hand and the hand of my other friend, and that friend grabbed another friend’s hand, and we ran to the dancefloor to form a circle and sing and dance to that song—a song about every crack on a broken heart. Everyone danced with their eyes closed, and my friend Rosa with a Modelo in one hand and another over her broken heart. All of it felt good, even in a filthy place.

Chuy and I joke about how white folks are lucky we don’t get violent on them. How we instead we resist white supremacy with art. We thought a lot about that during the recent presidential election. We smoked more during that time because otherwise the stress would’ve killed us. One of those nights, after hearing some racist thing said by Donald Trump and then irresponsibly repeated over and over by the media, Chuy and I got together to smoke and talk. “Put on some of The Smiths’ shit,” he said, “fuck it.” He asked for me to play “This Charming Man.” And when I did, we didn’t get passed the first few seconds. Chuy asked me to rewind those first few lines. “They’re perfect,” he said, “go back, rewind.” We did that a good five times. Over and over we sang: “The boy with the thorn in his side/ Behind the hatred there lies /A murderous desire for love/ How can they look into my eyes/ And still they don’t believe me?”We both let out long “fuuucks” in our state of high admiration for what those lyrics meant for us—about our experiences growing up brown in this country, of being seen but not seen, or seen but not heard. And a feeling of anger we turn into hunger for love—for our own sanity and to not turn into the oppressors we despise.

“Badass lines,” I said. And as if suddenly sobering, Chuy got up from the couch he was nestled in and shouted, “but the dude is White! Fuck Morrisey and Fuck The Smiths.” But when the song ended, he said, “play that shit again.” And we laughed hard.

After those four examples, I ended by telling Chuy that this Chicano love for Morrissey and The Smiths ain’t about loving Morrissey and The Smiths as it is about loving what they represent—emotional intelligence in a world that doesn’t care about emotions, particularly the emotions of marginalized people. That they represent an ability to embrace the sadness of that reality, so well that we can lift that sadness off each other to feel a little lighter for a little bit.

Chuy called bullshit on it. He says that Los Bukis and Juan Gabriel represent the same thing. That we could be wearing Marco Antonio Solís or Juan Gabriel shirts, but we choose to wear Morrissey and The Smiths. Which then led me to think that maybe, just maybe he’s right. That for whatever reason (ahem, colonialism) we only know how to make gods of white people. All of our gods and saints are white. Maybe we still don’t know how to see ourselves, brown people, as our own gods.

Just as I was telling Chuy that I was writing this essay he said that he’s gonna buy me a Juan Gabriel shirt and a Bukis one, and that he already got me one of Selena. “You ain’t gotta throw away that Smiths’ shirt,” he said, “but you better wear the ones I get you…and wear them more than that ugly Smiths’ one.”

Miguel Jiménez is a professor of English and fiction writer from Chicago’s Back of the Yards.