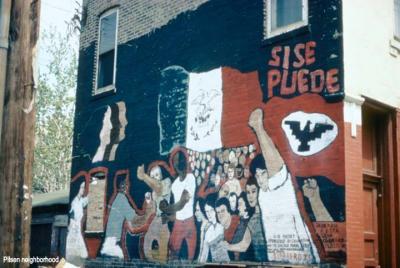 There are striking parallels between the two accounts of the rise of Chicago Mexican art presented in Beisman’s first issue. Overall, Francisco Piña and I agree about the importance of the Pilsen-centered Chicago Mexican arts emergence. But where Francisco seeks to differentiate the Chicago Mexican arts from developments in the Southwest and the east coast, I am intent on pointing to the at least partial impact of those developments on the emerging Mexican artists, at least a few of whom (Mario Castillo, Ray Patlán, José Gamaliel González, Carlos Cortez and Jaime Longoria, as well as writers like Ana Castillo, Sandra Cisneros, Carlos Morton and Carlos Cumpián), were strongly influenced by Chicano currents either from Texas (or from Midwest-based South Texas migrants), or, in the case of Gil Cárdenas’s influence on González, from California. This is not to over-emphasize the Chicano dimension. There are tendencies in early Chicago Mexican muralism that bespeak the influence of Chicano iconography; but a fullscale chicanismo could not emerge in Chicago for reasons which Louise Año Kerr had pointed out in a general way several years ago in her dissertation, The Chicano Experience in Chicago—but, like all the other early writers on Mexican Chicago, with hardly an reference to the arts. Piña fills the historical void when he points to how the underlying nature of Chicago’s Mexican arts were shaped by the industrial and transnational processes affecting Mexico and the particular urban setting and situation of Chicago and its ethnic or minority populations. I have tried to point to the impact of the local even in today’s globalized contexts, above all in my co-edited book Orbis/Urbis Latino: Los “hispanos” en las ciudades de los estados unidos (Houston: LACASA Books 2008); and that book’s central thesis about the impact of different urban contexts in differentiating Latinos and their expressive forms (and shaping the particular local struggles between forces of gentrification and Latinization), is no more readily exemplified than in relation to Chicago’s Mexican and Latino arts.

I want to pay great tribute here to a generation of people trying to write about and understand the Chicago Latino and Mexican arts emergence—people like Victor Sorell, Bertha Husband, Jeff Huebner, my deceased friend and collaborator, Michael Piazza, and a few others whose names I can’t seem to remember today for their efforts over the years. Francisco Piña has done marvelous work in developing telling volumes on the work of Marcos Raya, Rene Arceo, Gabriel Villa and, very shortly, Piloto. In his article, he shows how he has developed a grasp of Chicano history and some of the polemics raging about aesthetics, values and implicit ideological perspectives. This is far more than most post-1980s Mexicans have done in that rarely undertaken effort to understand the formations and problematics experienced by previous generations of their countrymen and women, whether they crossed the border or the border crossed them. It’s this Chicano knowledge that Piña draws on as he seeks to separate the Chicago Mexican contribution from the centers of Chicano art. But doesn’t he go too far in this? How could the local artists not experience some influence from the 60s resistance movement in California or even the Boricua movement in New York and of course Chicago? As the Dr. Jorge Prieto’s autobiography makes clear, even in a conservative bastion like Notre Dame, César Chávez’s brand of Catholicism came to have a very special effect. When Chávez and Cantiflas died just days apart, there was no doubt that Chicago Mexicans identified more with the comic than the civil rights leader. Many Chicago Mexicans had been living in Mexico during the leader’s heydays; many of those who knew off him were turned off by his hostility to border-crossing workers used as scabs and impeding the fight for minority workers’ rights.

This said, I for one sense a lingering distance which leads Francisco to perhaps overplay the very differences he has been astute enough to bring forth. There is an underplaying of the Mexican influence on Chicano art, and an underplaying, I believe, of the interplay of influences between Mexican muralism, WPA art and West Coast Chicano and Chicago Mexican art that he fails to register. In relation to muralism, Francisco seems to forget the impact of John Weber, Mark Rogovin and members of the Chicago Public Art group, subject to several worldwide mural trends, on several of the Mexican artists who would come forth, including those who attended the School of the Art Institute. Patlán’s early work was certainly rough and ready compared to what he would do later in San Francisco; but is it any wonder Francisco plays up the Benito Juárez mural that becomes different from the earlier murals by virtue not only of Longoria’s California Chicano input, but perhaps more decisively the contribution of Malu Ortega, with her Mexico City-formed image eye? How can he fully overcome the Mexican processes that led him to see the defects of one mural and the qualities of the other? Has he fully transcended his own limitations in this respect? And I am certainly concerned about his apparently negative view of the pan-Latino or “Latin American” trend that emerges in Chicago, even as Mexicans develop their regional associations. One of the clear characteristics of Chicago Mexican art is its ties to Puerto Rican artists as well as other Latin Americans who are becoming Latinized by their Chicago experience. Is this a distortion of their original regional or national identities or a sign of growth? And what do we make, then, of the Puerto Rican iconography in at least two Héctor Duarte murals I’ve come to know?

My own formation as a cultural critic somewhat latinized by his life experiences certainly leads to several limitations; and maybe my growing relation to things Chicano in California and Michigan and Minnesota overly affect the way I see things in Chicago. But maybe my limitations make me able to see some of the limitations in others.

If I understand Francisco correctly, perhaps the crux of our differences rests with his apparent view that the Chicago appropriation of the theme of Aztlán does not imply the at least partial impact of Chicano thematics, even if subject to Mexican re-appropriation, whereas I believe that that appropriation indicated an effort to draw on Chicano militancy as a mode of intensified resistance that would help activate a community that the artists felt had too passively accepted a secondary status in Chicago’s world of segregation and racial profiling.

Who is right in this regard? Apparently some people found the Movimiento Artístico Chicano too radical and too un-Mexican. Even MIRA suffered, I believe in this regard. I hope and believe that Piña, with leads from historian Juan Mora and others, is going to help all of us here and in the U.S. reach a deeper understanding of Chicago’s Mexican, Latino/a and Latin American art than we’ve ever had before. I just hope too that he is open to the currents and contradictions that will enrich his work along the way.

In this spirit, I wish to set forth here nine theses I cooked up for a section of my introduction to José Gamaliel González: Documenting the Work and Life of a Chicago Mexican Artist and Activist—theses which are indeed implicit in my introduction to González’s Bringing Aztlán to Mexican Chicago: My Art, My Work, My Life—which are subject to debate, modification and even rejection, but which I hope may lead Francisco and all of us to a richer understanding Chicago Latino and specifically Mexican cultural expression:

In José González’s case the struggle for space extended ever so quickly, perhaps, from his own space in the sketchbook or the mural to that of a space for all the artists in the barrio space of Pilsen, which had become his home, his axis mundi in Chicago. His defeat was an inability to stave off the competition for the space of art and culture in his world.

As I noted in the Preface to José’s autobiography, Bringing Aztlán to Mexican Chicago, one of the central themes characteristic of the rise of Chicago Mexican arts is how at least several community cultural producers attempted to bring a uniquely Chicano/a perspective to the attention of a larger population that was largely-of Mexico origin and orientation and how at least certain sectors of this Mexican population took on Chicano and pan-Latino positions as they sought to transcend the divide and conquer patronage tactics typical of Chicago politics and develop a more militant agenda inspired by the Chicano movement of the 60s and tied, locally, to the efforts to forge a militant independent Mexican and Latino politics in relation to the emergent movement which would bring Harold Washington to power. Local mexicano and Latino arts groups and the artists themselves were very much part of all that—connected to Rudy Lozano, Juan Soliz, Juan Velásquez and Chuy García on the one hand and also to Luis Gutiérrez and others on the other but also tied to the partial collapse of that convergence—to the deaths of Lozano and Washington, and the failed efforts of Solíz and Velázquez; above all the story is tied to the articulation or re-articulation of Daley-style politics in the 1990s and beyond.

The story continues in the present period, as growing numbers of Mexican and Latino artists struggle in the midst of Rahm Emmanuel’s effort to further gentrify ethnic enclaves and “characterize” urban education (see the article on Emmanuel in the first issue of Beismán).