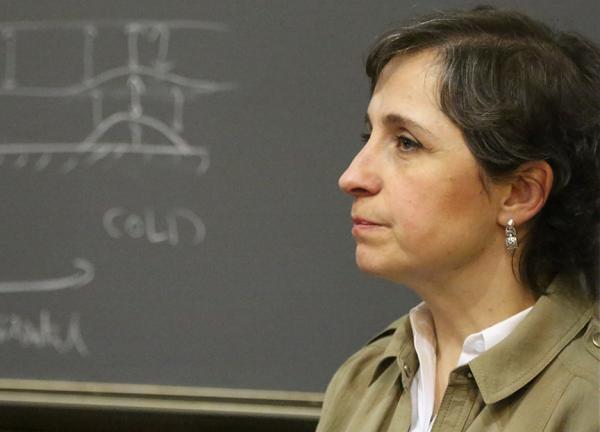 Carmen Aristegui in Chicago: Democracy and Freedoms in México

The air was heavy. Not the kind that bogged you down, but the kind that snapped you to attention and forced you to be present in the moment. There was a stir amongst those seated in the auditorium as one or two empty seats barely dotted the mass of people. Black and white portraits of the faces of the 43 disappeared from Ayotzinapa outlined a banner draped across the back wall of the room. Bold, red block letters read across the banner, ‘Vivos se los llevaron, vivos los queremos’ But just as Carmen Aristegui was set to take the podium something happened. One by one, the people seated at the top left of the room raised their left arms to the sky with a clenched fist. Then the counting began.

Moved by the symbolism before her introduction, Aristegui took a moment to thank those in attendance and The Katz Center for Mexican Studies and The Pozen Center for Human Rights at the University of Chicago for having her once again as a guest speaker on campus. However, it didn’t take long for Aristegui to dive into the topics that filled Kent Hall to the brim with seatless onlookers lining the pathway to the auditorium, eager to listen. Up for contention were democracy and freedoms in México, or the lack thereof.

“Mexican society is alive and will not stand for the stories that don’t fit the facts,” Aristegui said to start the evening following the rally cry that preceded her introduction.

What’s more is that México ranked as the least satisfied with their country’s democracy. Only 32% of the population felt represented by the government and only 17% by congress. One out of every four people thought that their country’s elections weren’t clean and 72% of the population felt that the administration of Enrique Peña Nieto had little to no transparency. Almost immediately, barely a whisper could be heard through the crowd as all eyes were locked on the discussion unfolding.

Beyond the level of dissatisfaction that the people of México have developed towards their government, the crime of impunity has ravaged the country over the years. Globally, México ranks second with one of the highest rates of impunity. Aristegui detailed how there has been a complete collapse of the justice system. Not only are people being disappeared and murdered at an alarming rate, but near guaranteed impunity has incentivized organized crime. As a result, it doesn’t seem to matter if you have ties to any sort of criminal activity, everyone is in danger.

In the years since the ‘war on drugs’ was initiated, more than 27,000 people, 73% male and 27% female, have been disappeared and between 2006 and 2014, 30% of those kidnapped were under the age of 18. More recently, women have been heavily targeted by organized crime groups, evident in the 200% increase of kidnapped female adolescents between 2012 and 2014. Although somehow, Aristegui managed to keep an air of optimism about her that snaked its way through the audience and kept people at the edge of their seats. Even after revisiting the tragic details of Ayotzinapa, Tlatlaya, Apatzingán and Cuauhtémoc so lest we not ever forget, a faint smile still managed to endure through all of the blood and terror that exited her mouth with the facts of these massacres.

As a journalist herself, Aristegui transitioned her discussion into the media duopoly between Televisa and Azteca TV in México that controls nearly all of the commercial television channels. Mass media in México has been hijacked to try and justify and support the actions of a corrupt administration, and not just by the television networks. Thirteen commercial groups own 80% of radio broadcasters. Translating to an extreme absence of critical information being provided to the public, which in turn has created great skepticism, especially amongst young people, about the accuracy of what they are being told. Current Mexican President Enrique Peña Nieto is someone who has benefited from the media duopoly.

Just in 2013 and 2014, Peña Nieto spent more than $14,663,000 for official publicity through local broadcasting networks. Aristegui went on to explain how Peña Nieto was arguably created and thrust into the conscious of the Mexican people through the work of the media duopoly. Almost fittingly, a dull ring suddenly surfaced off to the side of the auditorium. The phone continued to ring and Aristegui smashed the distraction with some comic relief.

Just as quickly as the unplanned ring sent the audience into a wave of laughter, Aristegui brought everyone right back to her point and purpose for being there.

“It’s talks and spaces like this one tonight that make me hopeful for the future of México,” she explained as she emphasized the importance of conversing and sharing ideas with one another. When asked about the roots of her optimism for México, it was with a calm demeanor that she conveyed her pure love for her native land and her desire to see it change for the better. Simple, but profound in its forthrightness.

Above anything else, hope lingered in the air the longest as the last person stepped through the doors and into the cold winter evening. And even as the faces of the 43 disappeared carefully came down from the wall, Aristegui firmly stood standing on her hope and commitment to keep fighting for as long as it takes, like so many before her have done. After all, the fight does continue and I will leave you with the same words Carmen Aristegui left us with.

Parker Asmann is a 2015 graduate of DePaul University with degrees in Journalism and Spanish, along with a minor in Latin American and Latino Studies. He is currently residing in Chicago while focusing on issues of social justice and human rights. He is a member of El BeiSMans Editorial Board.