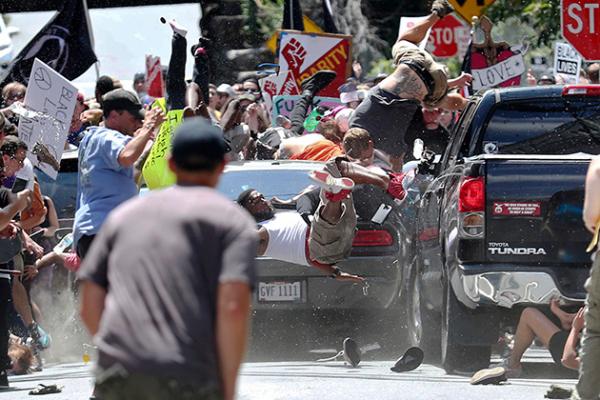 Vigil in response to the violence in Charlottesville, VA. Photo: Zach Gibson/AFP/Getty Images

There are few words left to describe the heartache a lot of us have felt since November 8th, 2016–the heartache that intensified significantly last weekend.

The events that transpired in Charlottesville, VA are devastating. It is hard to believe so many people still live with the mentality that white people are superior and our country is in need of an “ethnic cleanse.” I cannot understand how we are not past this bigoted and hateful mindset.

What is equally painful is watching the President of our country defend the Nazis and white nationalists that have emerged from their hiding places in the past year. It is painful to realize that his defending of these people doesn’t come as a surprise–he has emboldened and perpetuated their hateful rhetoric throughout his entire campaign (literally from the moment he announced his campaign), and throughout his Presidency. The actual Ku Klux Klan are outspoken Trump supporters; the fact that this wasn’t alarming enough to not vote this man into office goes to show the hate that is alive and well in our country. Denials of this hate are naive, moronic, and if you engage in them, telling of your privilege.

It took President Trump two whole days to release a decent statement on the tragedy in Virginia, and he did not even completely and unabashedly reject literal Nazis. This in itself is disturbing and egregious. While he said all the right things in his second statement, his actions speak louder than his words; I don’t buy his speech and I don’t think he does either. Even Richard Spencer said the statement was more “‘kumbaya’ nonsense” and that he didn’t take it seriously. “I don’t think Donald Trump is a dumb person, and only a dumb person would take those lines seriously.”

In any case, in Trump’s first statement, he essentially equated Heather Heyer with the hate groups by placing blame on “both sides”; Heather Heyer, who lost her life valiantly fighting against what our President has not even come close to disavowing. The simple fact that Trump has placed blame on “both sides” is telling enough of the bigotry he holds in his own heart. It is unfathomable to me that the leader of our country literally cannot repudiate NAZIS AND WHITE SUPREMACY IN 2017.

With a President like ours and with followers like his, we can no longer sit around and silently condemn racism. We must do something. People genuinely believe having a darker skin tone is telling of your worth as a human being–to the point of using violence and murder to assert it. As a Mexican-American woman, I find it offensive, degrading, hurtful, and disgusting. Now is not the time to remain apathetic or silent. It is 2017, and we have to get past this despicable, evil, and racist mindset.

Complacency is just as bad as supporting it. Use your privilege to help those who need it–because it’s needed now more than ever. Take a stand. Make your voice heard. Your voice matters.

Valentina Caballero is a sophomore at The University of Oklahoma, where she is majoring in Elementary Education and minoring in International Development. Email: cabavalentina@gmail.com.