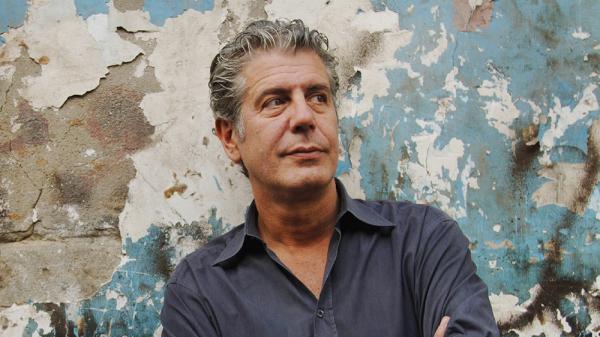 Anthony Bourdain became an instant celebrity in 2000 with the publishing of Kitchen Confidential. He was one of the few celebrities that I followed and respected. After purchasing Kitchen Confidential at a used bookstore, I put it on the “future enjoyment” shelf of my library, hoping to get to it sometime in the future. The book moved to the “must reading “ shelf after viewing an episode of Bourdain’s No Reservation television program. That episode began when Bourdain asked the line cooks from Brasserie Les Halles, the restaurant where he had been executive chef, “what part of France are you from? “ One by one the line cooks and the executive chef, said “Puebla.” The point being made in this episode was that the restaurant industry, from fine dining, such as Brasserie Les Halles, to the dives in street corners would collapse without Latino immigrants (and by insinuation other important industries). And yet opportunist politicians pressed for measures aimed at ending “illegal” immigration by mass deportations and expanding the border wall. To highlight the absurdity of building the wall in a country addicted to cheap immigrant labor, the episode spotlighted the Texas-Mexican borderlands, a region that has been the glue binding Mexico and the U.S. ever since both countries became neighbors in 1848. This episode came out in early 2006 in the midst of the “Immigrant Spring” when millions of people demanded rights for immigrants by marching in the streets of small towns and large cities.

After watching that episode, I read Kitchen Confidential. It was a pleasure reading it. One of the points that struck me about the book was that, unlike other celebrity chefs, Bourdain recognized the value that Latino immigrants play in the restaurant industry, albeit in the kitchen. He wrote, “the very backbone of the industry, whether you like it or not, is the inexpensive Mexican, Dominican, Salvadorian and Ecuadorian most of whom could cook you under the table without breaking a sweat.” Few non-Latino celebrities had given Latino workers such a recognition.

In the past few days much has been said and written about Bourdain, from the dark side of drug addiction in his younger days to the genius that innovated television viewing by bringing to the living room of many homes the food and cultures of exotic Hanoi, Buenos Aires, Tangiers, and the peasant villages of Africa, Asia, and Latin America. Latino commentators singled-out Bourdain’s strong views on behalf of immigrant workers.

I agree with the many who commented that one of his main achievement was Bourdain’s use of food as the entry for educating his viewers about the world outside of the U.S. In my appreciation of Bourdain, I would like to add to this point by stressing that this “education” of the viewer was a daunting task for the “educator.”

I believe that Bourdain knew well the “American character” and operated with the premise that many, if not most, Americans had been conditioned from an early age to become closed-minded chauvinists. From the earliest of our years, it has been pounded on us that “we,” as Americans, belong to the greatest nation on earth, the land God blessed with freedom, liberty, abundance, and so on. “We” have been trained to measure the world and its many cultures by “our” standards: “we” are superior and “you and the rest of the world” are inferior. Embarrassingly, “we” embrace our chauvinism and ignorance about the world with pride. The common attitude of many is and has been, “I live in the USA, so why the hell would I want to know about your country and culture.” Nobody personifies this “look at me” and “who cares about your culture and country” attitude better than President Trump. With that in mind, I believe that Bourdain worked hard in his documentaries to make a dent on American chauvinism.

In the case of the culinary industry, this “look at me” attitude fits the profile of American trained cooks as Bourdain noted in Kitchen Confidential. He pointed out the difference between “American” and Latino immigrant cooks. “Generally speaking,” he wrote, “American cooks-meaning, born in the USA, possibly school trained, culinary sophisticated types who know before you show them what monster au beurre means and how to make a béarnaise sauce-are a lazy, undisciplined and, worst of all, high-maintenance lot, annoyingly opinionated, possessed of egos requiring constant stroking and tune-ups.” In contrast to these “members of a privileged and wealthy population,” the kitchen became the school of hard-knocks for the “Ecuadorian, Mexican, Dominican, and Salvadorian cooks I’ve worked with over the years.” Their kitchen schooling made them better cooks than “most CIA-educated white boys.” (The CIA are the initials of the Culinary Institute of America, the premier culinary school in the U.S.) Needless to say, Bourdain preferred to work with immigrant. Perhaps this everyday kitchen interaction with Latino immigrants led Bourdain to explore the world and bring this world to the living rooms of his viewers.

Over the years I have been a fan of his many of Bourdain’s television episodes. Although the episodes followed patterns, they were never tiring because the world of cultural exploration is never-ending and culture is always changing. He showed us that there were other worlds in this world, each with their culture, and each culture just as valuable as “ours.” After watching a few episodes, the sophisticated viewer would reach the conclusion “we,” as Americans, are not exceptional people. Bluntly stated, the basic premise of his episodes was that there is no such thing as inferior and superior cultures.

To make this point, he depended on a first-rate team for his television production, from camera operators to writers. In each episode, he used food as the gateway to exploring the broader aspects of culture and politics. Besides his production crew, he, as a guest on foreign soil, heavily depended on what the ancient Greeks called proxenos, the local guides who introduced him to their world. In one of the episodes on Mexico, for instance, his proxeno was Carlos Llaguno García (1977-2015), an immigrant who rose from the bottom to become the executive chef of Brasserie Les Halles. Llaguno, the proxeno, welcomed him into his family’s home and guided Bourdain in Puebla, his home state. They feasted on mole, escamoles, and pulque.

The central part of almost all episode was the conversations that took place at the table, what Spanish-speakers call convivencia, a word that originated in the era of Muslim rule in the Iberian Peninsula. It referred to the coexistence of Jews, Christians, and Muslims. For centuries and throughout the world, people have gathered as family, friends, and guests to eat, drink, and converse. Bourdain, a gifted conversationalist, came across hundreds of people in many convivencias where the conversation focused on the many aspects of daily life. In our times of greater atomization of society, these convivencias remind the older generation of an ancient human experience that is vanishing before their eyes and the younger one of an experience that has been denied to them.

Given the popularity of his programs and large following, I’m sure he opened many closed minds. The experience of coming into contact with many cultures also changed Bourdain. He started his culinary career in fine cooking and over time came to enjoy the food of the streets, small restaurants, and the family kitchen. He came to appreciate more and more the cuisine of the peasantry, one based on the resources of their environment and no animal part went to waste. It seems that he felt more comfortable in the world outside of the U.S. In this sense, he was not unique. The few who have seen the world, from Herodotus and Marco Polo to Kapuscinski, home is no longer where you are born. I and millions already miss you.

Juan Mora-Torres. Associate Professor of Latin American History at DePaul University. A former Teamster, he has worked in the agricultural fields, canneries, and as an adult education instructor. He received his PhD from the University of Chicago and has taught at the University of Texas at San Antonio and Wayne State University (Detroit). His research and writings focus on the history of the U.S.-Mexican borderlands, Mexican migration, popular culture, working class formations, and Mexicans in Chicago. He is the author of The Making of the Mexican Border (University of Texas Press, 2001), and he’s currently working on Me voy pa’l norte (I’ m Going North): The First Great Mexican Migration, 1890-1940. The Making of the Mexican Border won the Jim Parish Book Award. Mora-Torres is the Board President of El BeiSMan.