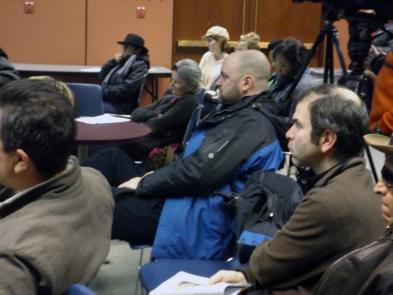 Troy Hernandez during his presentation at the March 25 meeting at Lozano Branch.

Pilsen activists vowed to continue the fight to oppose the new metal shredder approved by the Zoning Board of Appeals on February 21 and promised that they will appeal the decision and organize a petition drive to present to Mayor Rahm Emanuel.

“We will continue to oppose this environmental injustice of having two metal shredders in our community,” said Rosalie Mancera, a Pilsen Alliance board member.

The meeting to discuss the shredder issue took place on Tuesday March 25 at Lozano Branch Library.

The new plant, called Pure Metal Recycling, will be located on 15 acres of land south of Cermak Road and east of Loomis Avenue, near the Chicago River.

The plant was proposed by Acme Refining Co., a company with seven Midwest locations and, according to the company’s own website, 400 employees and 200 trucks.

Since the community learned about the plan to open the new plant, the main concern of the residents and environmental groups has been its close proximity to Juarez Community Academy High School.

Even though plant officials have said it will be a safe operation, most of the close to thirty people assisting the March 25 meeting said they are skeptical this will be so.

Nelson Soza, executive director of the Pilsen Alliance, said his group will appeal the decision by the Zoning Board of Appeals which approved the new metal shredder on February 21.

“Some things are just common sense,” said Soza at the meeting, “There’s a soccer field nearby, and there are kids that are going to be breathing metal dust.”

Those attending the meeting also discussed starting a petition drive to Mayor Emanuel asking him to remove the plant because “Shredders help the world by recycling, but they can also harm communities in their proximity.”

Troy Hernandez, a PHD graduate from the Uiversity of Illinois at Chicago, gave a presentation on environmental issues associated with metal shredders in other parts of the country.

Hernandez, an analysis consultant, cited a study done last year in Houston by the Houston Bureau of Pollution Control near five metal recyclers after the city received at least 200 complaints of noise and smoke from local residents who lived near the five plants.

According to the study, the test conducted found the presence of the metal compound called hexavalent chromium, also known as chromium VI, at each of the five facilities. This metal compound is a known carcinogen.

Researchers warned that if such elements are continuously in the air and in larger quantities, it could “cause hundreds of additional cases of cancer per million people,” according to the Houston Chronicle

With a metal shredder already located in Pilsen, Hernandez said that in 30 years Pilsen could “see 67 extra cases of cancer”.

Hernandez said he would hope that the local Environmental Protection Agency (EPA) would conduct more tests to see how another metal recycling plant would impact the quality of the air in the area.

Pilsen already has the Sims Metal Management recycling plant at 2500 S. Paulina Avenue, which in the past has also raised the concerns of local environmental groups.

Those at the meeting also said a community faction led by immigration activist Emma Lozano supports the new plant because it allegedly will bring in 90 new jobs to area residents.

Activists at the meeting said the controversy now asks the community at large to choose between jobs or the health of its residents.

“Some people are being told about the jobs but not the consequences of the plant being so near,” said Byron Sigcho, also researcher at the University of Illinois at Chicago (UIC.)

“Are we willing to risk our lives for 90 jobs? “Asked Mancera, who added that not enough information is being given to the community at large about the impact the plant might have on the health of local residents.

Some at the meeting said they are puzzled about a student environmental group at Juarez High School which came out with a purported “study” which showed that the new plant would not impact the health of the area’s residents.

Mancera said the administration at the high school refuses to give the Pilsen Alliance a copy of their “study”.

Mancera said the discussion about the metal recycling plant is being stifled by the Juarez High School administration which refuses to meet with community members who question the plant.

“The principal is very evasive and often unavailable and they make you wait for 45 minutes so you get discouraged,” said Mancera about Principal Juan Carlos Ocon.

Some residents in the area said it is ironic that the local and city environmental groups managed to close down the Fisk Plant two years ago and now they have to contend with another metal plant that has a potential to affect the quality of the air.

Alderman Danny Solis (25th), according to the Sun-Times, has received $33,000 from Acme Refining Co. in political contributions. Activists at the meeting said they were also concerned that one of Emma Lozano’s daughters allegedly works for Alderman Solis.

Rosalie Mancera (right) said the community is being asked
now to choose between jobs and the health in the community.