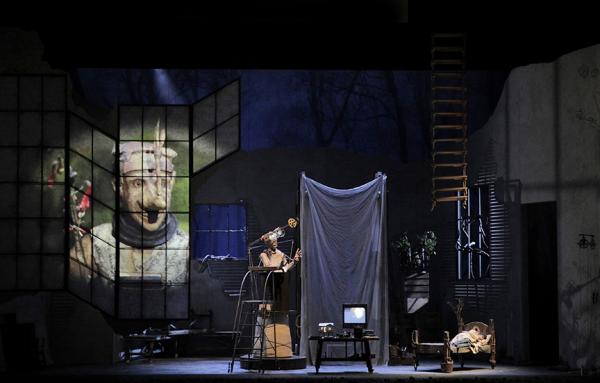 A Visionary Faust at the Lyric

The opening of Gounod’s Faust at the Lyric was a true visual feast, especially for set design lovers, as a young student who sat next to me observed. The man behind this visionary rendition of Faust’s infernal internment is John Frame who, with the assistance of set and costume designer Vita Tzykun, lightning designer Duane Schuler, and projections designer David Adam Moore, was able to add yet another dimension to this multilayered Faustian characterization.

This new Lyric production of Faust directed by Kevin Newbury probably surprised the expectations of an audience now accustomed to visual and special effects abundant in film and videos. Not only were sculptor John Frame’s collages and sculptures propped up on moving platforms and projected on (divider) walls and screens, but several of them were cast into human shape by the use of actors wearing large wooden-like heads to form part of Mephistopheles’ entourage of demons. The result was a dark, yet flippant, psychological characterization also represented by silhouettes, expressionistic objects and mechanisms (lens, monitors, architectural models), turbid and cryptic video excerpts. Miraculously, all these practical effects did not muddle nor overcrowd the stage. We can say they were artfully displayed.

Faust’s demons come to life and so does, of course, the opera’s most aberrant character, played by American bass-baritone Christian Van Horn, who steals the show in all possible ways. Despite the dark and ulterior motives, Mephistopheles, as portrayed by Christian Van Horn, turns out be a likeable and almost tender character. Van Horn is not only a great actor, but he also moves graciously across the stage. He makes his characterization seem so plausible that we forget he’s a great baritone. Perhaps we should thank movement director Zach Winokur not only for Van Horn’s swiftness on stage, but also for the agile maneuvers of the actors who play his demons.

Another pleasant surprise in this production of the legendary scholar who sold his soul to the devil is that it was jolly with drinking songs and quite funny, especially when Mephistopheles pretends to be courting Marthe, Marguerite’s sensual neighbor. The action casually shifts from light to dark in the first acts, but after ACT III, the attention is fully on Marguerite’s suffering and her brother Valentin returning from war. Valentin, played by baritone Edward Parks, seems to be the only Earthly hero to confront evil. He tries to avenge Marguerite’s vile treatment by Faust, but again Mephistopheles intervenes, and he is killed by Faust in a duel. The tragic theme of Goethe’s play surges again. Mephistopheles himself is no longer as light-footed and gracious as in the beginning, for his true motive is coming to an end.

We must not forget that Gounod’s Faust is only partly based on Goethe’s great masterpiece, reason why when performed in Germany it’s titled “Marguerite”, who happens to be the central character of this production also. The librettists, Jules Barbier and Michael Carré also based it on Carré’s Faust and Marguerite, another opera created to please the taste of the period. The central theme then is not Faust’s damnation but Marguerite’s salvation. Marguerite is a virtuous woman seduced both by Faust and Mephistopheles, but her sins are absolved due to her deeper, natural innocence and purity of heart. Unlike Faust who willed his destiny by invoking the devil by means of his own art (he sculpted the devil), Marguerite was practically assaulted and violated. The result is a pregnancy which, as portrayed in this production, she terminates with an abortion (on stage, symbolically performed by Mephistopheles himself). The current moral undertones of that act are obviously to contextualize the story in our convoluted times, yet the original story had the child born and Marguerite would then commit infanticide.

As portrayed in this production, Marguerite suffers, and I want to emphasize the word suffer, yet another transformation; one which unfortunately may affect audience identification with character. Chicago-native Ailyn Pérez’s Marguerite was so accosted with infirmity that it was hard to imagine her being as beautiful as fathomed by damned Faust. If it weren’t for her magnificent voice. Pérez filled the stage with stupendous sound. But her role is overburdened with moral and physical weaknesses. I understand the element of current verisimilitude when the infanticide is portrayed as an abortion. But I fail to understand why this Marguerite is on crutches. Modern, up-to-date characterizations are fine and effective sometimes, but director Kevin Newbury’s Marguerite is constrained in such a moral and physical cast (a very hard cast) that it actually turns her into someone deserving pity, rather than empathy. If the intention was to create a progressive Marguerite, the unfortunate result was a token of political correctness. As if being seduced by a suicidal loser was not enough, they had to add crutches to her to make her feeble. No doubt, many of the female operatic roles are an embarrassment to the operatic intelligentsia and an ongoing field of laborious transformation to those who realize that they are no longer appealing; but that in itself should be an incentive to recreate strong, well-wrought, modern female characters and allow them a more dignified finale.

The main two characters of this French romance did not inspire any empathy. They were too weak and malleable. Faust is reduced to a bastardly figure of desire. Far from the complex character created by Goethe, Gounod’s Faust at the disposal of Newbury appears untouched by the philosophical or aesthetic interests he so assiduously lost his mind for. Doctor Faust, as he is still named in the libretto here, only seems to regain his composure when French tenor Benjamin Bernheim sings. Berheim’s lyrical interpretation, abounding with sentiment and force, corroborates the romantic Faustian figure. Throughout the work, I was wondering how it would have sounded with a dramatic tenor.

This grand opera has so much more to offer. Charles Gounod’s music, a masterpiece conducted by Emmanuel Villaume, recreates the tragic undertones of Goethe’s work from the very beginning, when Faust makes a pact with Mephistopheles. Yet the true nature of his deal, the severity of his actions is not felt until ACT II, after the drinking songs and banalities of life, when the true mortal anguish is manifested by Edward Parks’s splendid voice in Valentin’s medallion aria. This aria foreshadows the fall, and its somber tones recapitulate throughout the work. Faust, Marguerite, and Valentin will all fall under Mephistopheles malevolent spell.