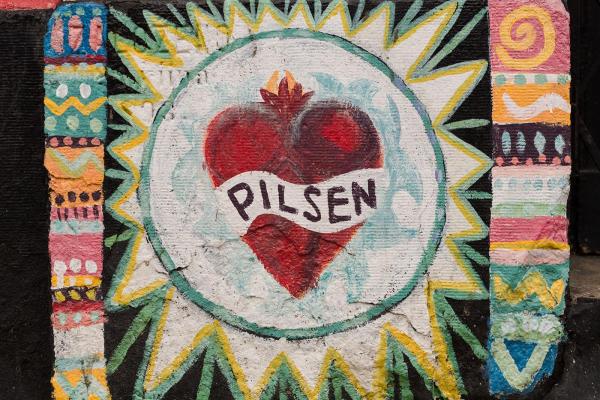 A much better title for this Channel 11 “initiative”, as they call it, should have been Resurrection Project Changes Pilsen as most of the one-hour documentary revolves about this Pilsen organization founded in 1990.

The Resurrection Project has rehabbed or built hundreds of affordable housing units in Pilsen during the past two decades in order to anchor the community against gentrification.

The organization was founded by six Pilsen parishes that put up $5,000 dollars each when they realized the parishes were losing their Hispanic parishioners who were moving out. Since the 1990’s this neighborhood, which escaped the Great Chicago Fire, has become a lucrative real estate investors market.

The gentrification ill winds have been blowing for years from the neighborhood’s east side where bars, cafes and artists’ lofts have mushroomed, much to the detriment of poor working class Latinos who cannot afford the $1,500 a month rents.

But let’s get back to the documentary since we are talking about television. The documentary works and is extremely well made except for the fact that it misses the real story and focuses most of its attention on the success of The Resurrection Project. Sadly, it overlooks the devastating effects of gentrification on this historic neighborhood.

Since the year 2010 this neighborhood, named for a city in the western Czech Republic, has lost 15,000 Hispanic residents due to gentrification.

At the same time, some 5,000 newcomers have arrived, mostly artists, university students and professionals who have discovered Pilsen as a place to live.

While one person in the film does mention that “three parishes have been closed in Pilsen”, the producers of this new documentary left out the struggle of Polish and Latino parishioners to save St Adalbert Church last year.

The church, considered an architectural jewel by old-time Polish parishioners and their families, was sold by the Chicago Catholic Archdioceses to the Chicago Academy of Music. The Catholic powers that be argued that the church, built by the Polish community long before there were even Mexicans in Pilsen, was now too expensive to repair.

The parishioners held protests, marches and even vigils but that part of Pilsen was not in the documentary. Maybe WTTW had a bout of amnesia.

The film also highlights, or maybe I should say retro highlights, Clinica Alivio, founded in 1984 more than three decades ago; and El Institituto del Progreso Latino, an education oriented community organization, also founded in the 1980s.

While the latter organization is quite successful, it has had its own labor disputes with teachers who wanted to organize a union and there have been student protests there over the firing of teachers.

I spoke to some residents who viewed the film and they said the Pilsen in the documentary is not the Pilsen they know.

“The documentary did not show the facts that I know about Pilsen,” said Reggie Gonzalez, who once worked as director of Casa Aztlan, the social center now closed and morphing into luxury apartments.

Gonzalez said My Neighborhood: Pilsen glossed over the effects of gentrification and did not go deep enough in exploring this topic.

“The documentary seemed to say that Pilsen is now a nice area and that gentrification is OK,” said Gonzalez.

A white resident of Pilsen, who said he has lived for ten years in the neighborhood, said he thought the film was solely about Resurrection Project to the detriment of other more vocal organizations.

Another resident, this one a Hispanic woman, said she thought that the documentary focused too much attention on the drug overdose death of a young Latino in Pilsen.

She said that there are a lot of young people in Pilsen doing worthwhile things which were not part of this documentary.

“This is not the Pilsen that I know,” she said, “There are many young people doing positive things, for example, there are young people in Pilsen who have won chess championships; I wanted to see young people who inspire us.”

At the end of the Juarez Academy showing, there was a brief panel discussion but it ended without a Q & A session with the audience.

During the TV showing, there was a studio “town hall” meeting with invited guests in the audience. Some of the give and take was pretty good, especially the questions from Victoria Romero, of the Pilsen Alliance, which is about the only independent organization left in Pilsen who asks the hard questions and regularly takes Alderman Danny Solis to task for his frequent acceptance of contributions from developers.

The Pilsen Alliance, according to executive director Byron Sigcho, has repeatedly shown the press donations to Solis from different developers.

Romero asked about set asides for low income housing every time a new development surfaces in Pilsen. She also asked about rent controls, an appropriate topic, now that rents in Pilsen have skyrocketed.

Romero said that low-income Hispanics cannot afford Pilsen anymore and Solis answered that the set asides for low income housing for each new development is 21 percent, the highest of any ward in the city.

“It’s insulting that our residents are being pushed out of the neighborhood,” said the gutsy Romero.

There were also a couple of errors of fact in My Neighborhood: Pilsen. One woman said there are “five million” DREAMers when most news media accounts say the figure is 700,000.

Also a tour guide at the National Museum of Mexican Art, who appeared in the documentary, when talking about the murals in Pilsen said that at the time “there was the Mexican Mural Movement”. It would be more accurate to say it was The Chicano Mural Movement.