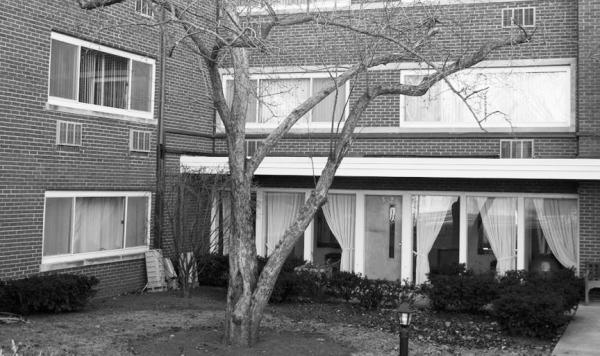 The Garden: A monologue

On October 19th, Colectivo El Pozo will present the play El edificio (The Building). The script was based on seven short stories and monologues written by authors living in Chicago. The Garden is one of them.

ANDY enters and faces the audience. He speaks with an Eastern European accent that is somewhat halting – like, literally halting between phrases, which he sometimes blurts out quickly. When he says things in quotation marks, you can almost see him making the quotation marks with his fingers. In fact, sometimes you do see it. When he says, “you know” (a habit, a verbal tic), it’s not a question.

He looks around and begins, somewhat tentatively.

Maybe, you don’t know. Every building, you know, has a homicide. Every building that’s around for a while, every building that has “something going on.” Some have more. Two, three. You know. There’s one over on Leland that had three. That’s like, in a good neighborhood, you know? Like, South Side, West Side, Little Village, who knows? You can lose count. Doesn’t… it isn’t worth it. Counting. Down there. You know. I mean, I’m not gonna lie, those guys, they go in for the homicide. “World class.” I’m not being racist, you know? That’s just the way. That’s just the numbers.

But around here, three is a lot. It’s respectable. This building, only got one. Me.

(Suddenly he remembers his manners.)

Oh, yeah, right. Hello! My name is Andy. Nice to meet you. I tell you the truth, my name isn’t really Andy. It’s Andrzej. “Jedrek” my Bubka used to call me. “Ah, Jedrek, come get your milk.” Whatever.

(He stops, suddenly almost overcome by the memory. He regains his composure.)

Sorry. I’m not used to this. I mean, this is my first time I do this. Talk to the… talk like this. I didn’t think—

Well. Anyway. I need to tell you “the story.”

(He gestures around him.)

I lived here in the building, basement apartment. “Garden” they call it here. Like, it sounds good, no? Like flowers. Better than “basement.” Better than “under the ground.”

Over here, over there. I just work in a store, store of Lensky. Yeah, he had store. Phone cards, lottery tickets, crap like that. Over there on Cicero. It was just what you call “a front.” I think that’s how they call it. We just, we call it Lensky’s. I worked on register, just selling stuff to people who came in. Not many, it wasn’t that kind of store. I mean, if people come in, I sell them stuff they want. Lottery ticket, Twinkie, that shit. Hostess fruit pie. Cherry fruit pie! I love them. But anyway. Back then, it was phone cards. Lensky had some special thing about phone cards. Good money. But that wasn’t his “real business,” you know.

Really, my job was different. Not to sell phone cards. My job, main job, was to “be blind.” To not see. To see nothing. What goes in back of store, what goes out back of store. Lensky had like, connection with Mexicans. Maybe and Russians. Stuff comes in, stuff goes out. I don’t see anything. That’s my job. I get some money, I send half to Krasnik, my mom, and my Bubka. Over there, you know. Home. Western Union. This was 1993, you know. They didn’t have no money over there. Like, zero. Nada. Maybe now, it’s little different. Little better. I think so.

OK. So, then one day, cops come. You know. “The cops.” “Bad news.” They need the money or they need to make the trouble. Like I said, I don’t know anything. Nada. They bring me to cops station, something about phone cards. Illegal or something. Cops, you know, they make the laws. So they make something up. They got me. I get scared, I don’t know. I tell them something, or something else. I try not to tell them nothing. But it’s not easy, cops, they are good at that stuff. And my English, not so good.

Anyway, after few hours, cops let me go, and I don’t know what to do. Call Lensky? Go home?

So I don’t know. Looks like, cops went over there. Got Lensky’s guys. They had some stuff, you know. Some big “bust” happens. Big problem for Lensky. I don’t know anything. I’m just in my room, you know. My garden. No lights, just in there. Thinking what I do. I think, maybe Lensky gonna call me. I got hungry, but I didn’t want to go out. I mean. I was afraid, you know. I had some pizza in fridge. So I think, well, I don’t have to go out.

Then, next thing, they come over there. Knocking on door. Really loud knocking, like they mean “it’s serious.” I have to answer.

I’m gonna tell you, I didn’t want it to happen. That’s stupid, yeah? Nobody wants it to happen! I’m gonna tell you, when it happens to you, you aren’t gonna be happy. No one wants it to happen. Except maybe a suicide guy. And a lot of those ones, let me tell you, they get, how do you say? Regret. At the last minute. They get “cold feet.” But it’s too late, you know? Next, they get real cold feet. Ha ha. Like, for real. So these two Russian guys come in, and I’m there just trying to eat my goddamn cold pizza. “Andy,” they say.

I know what it’s about.

I think about my mama, my Bubka. Who’s gonna send them the money?

It’s OK. You gotta get over it. Little by little.

(pause; he wrestles with it)

I think? It’s like this: Death is like Santa Claus, you know, or Tooth Fairy. And you, the living ones, you are like, you know, children.

(He looks at them for a moment, then lowers his eyes.)

So yeah. Thank you for listening. I think, you know. I don’t know. Maybe it helps.

(He doesn’t really want to leave.)