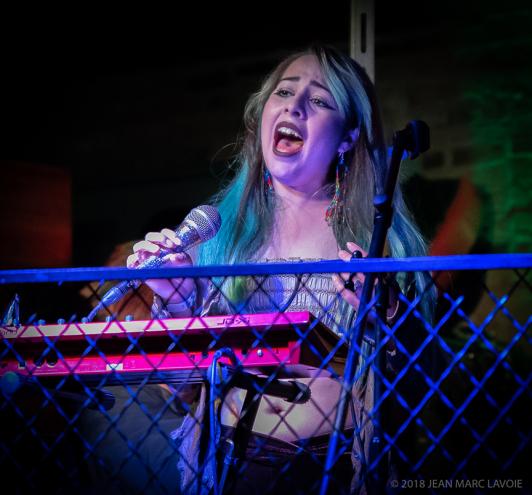 Sin Color: a new way to see and listen to the world

Crisia’s voice is sheer, transparent, ethereal. It is a voice that flows, goes up, down, and caresses the sensibility of the listener. It captivates, liberates. It is the vitality of poetry. It is the whisper of a persistent angel. Crisia was born musically gifted, with a prodigious voice.

“I sing from the heart,” she tells me smiling. The musical itch runs through her body, elevates her creativeness.

She started to sing before she could remember. She hummed to the songs that her Salvadoran parents listened to in South LA: the cumbias of Aniceto Molina, Charlie Zaa’s boleros. At an early age and before the smartphone era,her parents noticed her artistic talent. They listened to her while she sang intuitively in church. As a present, they gave her a karaoke machine so she could explore her young and diaphanous voice. In love with singing, from the church’s bench, she would echo the chorus and at home she would mimic the songs of Shakira, Maná, and Lola Beltrán. The mariachi songs also became part of her repertoire. Therefore singing ceased being an act of devotion to become her endless passion.

At age ten, her mother tried to enroll her in the church’s chorus, but due to her age Crisia was not accepted. In South L.A. an opportunity to learn to sing opera “fell from the sky,” she said unpretentiously. Her mother asked friends if they knew of a place that offered singing classes. After a few months of searching in South LA, she found a singing instructor — Antonio Espinal, a Mexican immigrant who taught her opera techniques for five years. It’s not that Crisia and her family were loaded; on the contrary, they are working class immigrants. Nonetheless, Crisia found ways to take classes. Besides her regular lessons, she babysat her instructor’s child at the same time she would listen to other private music lessons. Regrettably, the sudden departure of Espinal left Crisia without a sense of musical direction, but the artistic vein and the creative anxiety kept her searching for her niche.

Crisia met David Aquino in grammar school. She was in seventh grade and he in eight. Planning to compete in a talent show, Aquino, a guitarist, was looking for a lead singer. He found Crisia wandering the school’s halls experimenting with her voice. They performed a reggae song in the audition. It was a complete flop. Possibly, the jury was shocked with the melodic fusion of María Callas and Bob Marley. They did not qualify. Crisia went back to her opera classes and David continued playing with other groups…

Five years later — in the church of Santa Cecilia where Crisia was studying to get her Confirmation, the sacrament of initiation — she saw David from far away and, literally, ran over to chat with him.

They talked about music. Then she was attending an art high school where she studied vocal jazz. Besides attending school, he played with reggae, rock, and ska bands. To make ends meet, Aquino had the intention of putting together a cumbia ensemble. At this point in her life, Crisis did not know what was going to be the next step in her life. All she knew was that she wanted to sing. They continue the dialogue and exchanged texts. David sent her guitar riffs of the chords he was composing and he asked her to write the lyrics. She did not know how, but “did not know how to say no either.” She asked her mom for help with the first verse. “‘Causó un dolor en mi corazón…’ or something like that… and I started writing none stop, and the first cumbia was born.”

Out of a cumbia, Sin Color was born too. Crisia Regalado and David Aquino make up this talented duo. They are young and virtuosos. She lives in her singing — her voice awakens the joy of life. He is a clever composer; creates a sequence of notes that sublimes the listener. The world is vast in rhythms and variety of styles and music genres to only listen to the same beat. That’s probably why Aquino creatively navigates from rock, pop, cumbia, reggae, bossa nova to disco and indie. Aquino has produced his own style, his own genre.

Sin color is the finest example of a generation of millennials devoted to the arts: music, performance, theater and visual art. This generation has awakened; they know that their future is uncertain but nevertheless they have persisted and they are writing their own narrative from their remarkable resilience. Language is a cultural way of resistance and Sin color write their lyrics in Spanish as well as in English. David and Crisia have recently turned 21 and after three years experimenting in the studio, they have recorded their first album: Frutas, 2017, on top of the classic self-made demos.

The name of the duo comes from a song by Crisia: “El amor puede ser amargo sin color.” The main idea is reflected in the mission of the duo: “to sing about anything,” they don’t want a genre to dominate over another, they love to fuse styles. Crisia deeply believes that “music frees and transforms the human being.”

David and Crisia are millennials; they are like us. She is the prima that lives on 26th St in La Villita; he is the nephew from la 18 in Pilsen. She is the daughter of Salvadoran immigrants, he’s the son of Mexican immigrants. They are humble, musical prodigies, but talent itself does not make greatness. She sings in a church to make ends meet; he is renown florist, but above all they are fervent and dope artists.These two young adults invite us to dance, but also to reconcile tradition with modernity, and with their music they are proposing a new way to see and live the world.

Translated from Spanish by Leticia Cortez.

Franky Piña is a cultural advocate. She is a right activist of the transgender community; a writer; art enthusiastic and Editorial Director of El BeiSMan. Piña has been the cofounder of several literary magazines in Chicago: Fe de erratas, zorros y erizos, Tropel y Contratiempo. She is the coauthor of the book Rudy Lozano: His Life, His People (1991). Participated in the anthology Se habla español: Voces latinas en USA (2000) and Voces en el viento: Nuevas ficciones desde Chicago (1999). She edited and produced the art catalogs: Marcos Raya: Fetishizing the Imaginary (2004), The Art of Gabriel Villa (2007), René Arceo: Between the Instinctive and the Rational (2010), Alfonso Piloto Nieves Ruiz: Sculpture (2014), Barberena: Master Prints (2016) and Raya: The Fetish of Pain (2017). Currently, Piña is the cofounder of La Proyecta: Visibilidad a las desparramadas y sujetas trascendentes de la historia, an experimental writing space that exhibits and supports the work of women in the arts, culture and politics.