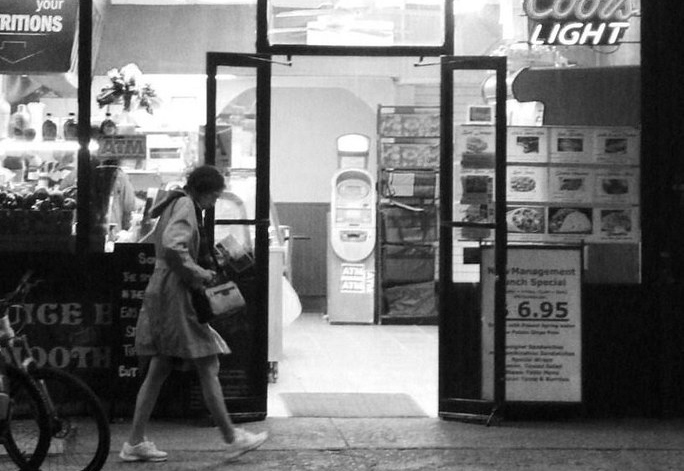 When my Social Studies teacher spoke of DREAMERS and visas,

she said undocumented was a synonym for illegal.

My hand shot up to tell her she must be mistaken:

My parents were undocumented, and they were not criminals.

Illegal is a synonym for killers or criminals,

and my papa was no criminal.

On weekends, I help him with the deli order at Jewel.

I point out verses on the posters behind the counter:

“I want a quarter pound of Sarah Lee Honey Turkey.”

“I want a half pound of American cheese.”

I walk him through each word,

he says he hears English like hissing radio static,

When my father is pulled over on 69th Street,

passengers huddle in the backseat of his Uber

float in the grey sky outside.

Silhouetted against the city of big shoulders,

my father’s big shoulders knot against their hissing English.

Because I am at school at debate practice,

After the March sun has set, I finally call back,

but I am too late.

The passengers have been Ubered by someone else.

He sits on the cold, concrete curb while

and all my father hears is,

and he thinks the country,

he thinks goodbye hugs and tears at O’Hare

and returning to his mother’s house in Peru,

to the yellow streetlights of the barrio he grew up in.

When I finally call him back,

I want him to put the cops on the phone.

I want to tell them he only drives Uber on the weekends,

to tell them he’s on my way to pick me up,

to tell them he can order a pound of American cheese for 1.99 at the deli

and that is important because criminals don’t eat American cheese.

Instead, I tell my father,

Let’s go to Panda Express when you get home,

we can talk about it over orange chicken,

but when we go to the deli this weekend,

you have to order.

The blue and white lights fade

and he turns the key in the ignition.

“I want de half pound of cheese American.”

And under the yellow streets of this cold March night,

Is an alum for Louder Than A Bomb Squad, a selective artistic apprenticeship at Young Chicago Authors for up-and-coming writers. Her work has been featured in La Nueva Semana Newspaper and Purdue University’s Literary Magazine Nuestra Voz. Ranked as one of the top twelve young poets of Chicago in 2018, she was granted the Literary Award by Julian Randall, as well as the Poetry Award by District D219. Apart from producing poetry, Penelope’s hosted open mics and showcases at YCA’s Louder Than A Bomba and Jose Olivarez’s book tour of Citizen Illegal. She has performed at The Metro, University of Chicago, Columbia University, Malcolm X College, and several high schools in Chicago’s Far North Side.