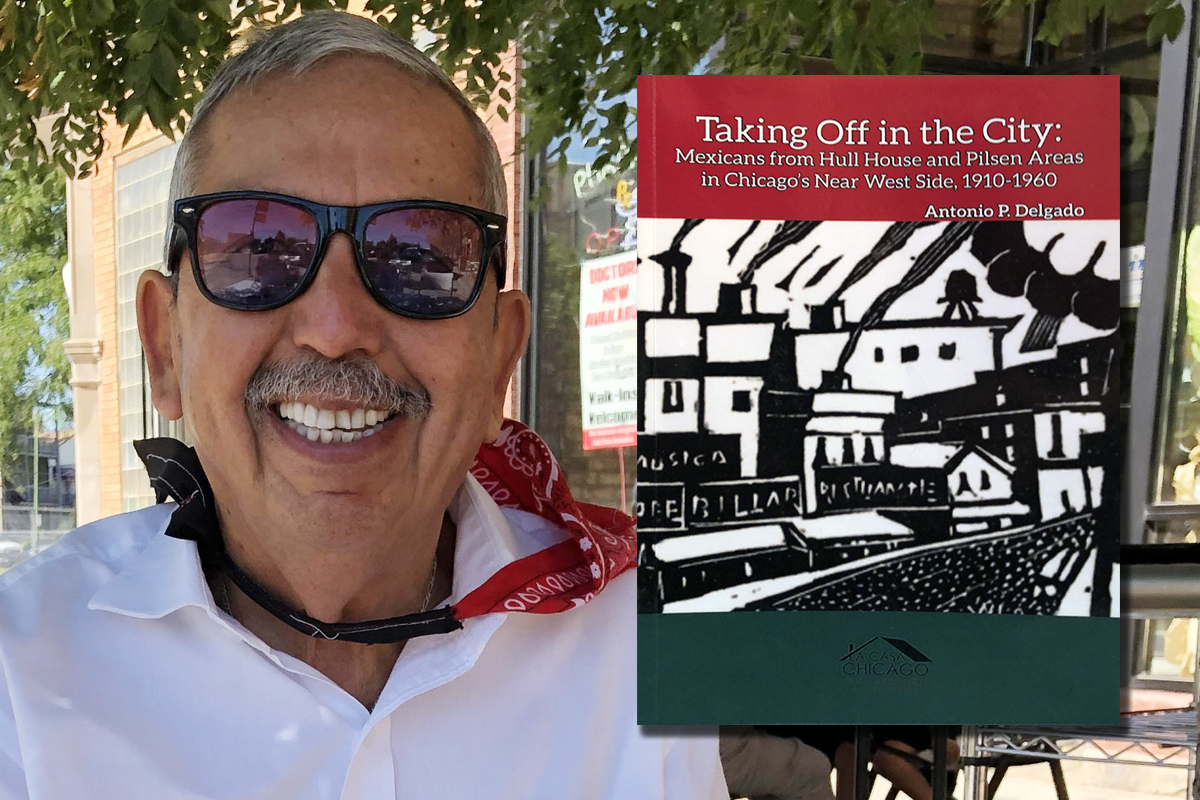 Professor and author Antonio P. Delgado in Pilsen during a recent visit to Chicago to promote his new book.

Taking Off in the City: Mexicans from the Hull House and Pilsen Areas in Chicago’s Near West Side by Antonio P. Delgado

Some things are meant to be even if it takes a long time. Say, for example, 42 years.

That is precisely the time that it has taken for history professor Antonio Delgado’s 1978 master’s thesis on the history of Mexicans and Mexican Americans in Chicago to get into print.

The book, Taking Off in the City, Mexicans from Hull House and Pilsen in Chicago’s Near West Side 1910-1960 was recently published in September by LACASA Chicago press.

You might say it was well worth the wait because the book is an excellent historical account of the presence of Mexican immigrants in Chicago since 1910 and their contributions, tribulations and growth despite facing racism, discrimination and two massive repatriations.

The book traces the arrival of the first Mexicans to the city’s Jane Addams Hull House neighborhood and works its way forward to describing how the creation of the University of Illinois at Chicago, once simply known as Circle Campus, displaced Mexicans south toward “La 18”, also known as Pilsen.

It is in the new Pilsen neighborhood that the Mexican population formed a magnet of political, commercial, and cultural activism in the early 1960s.

The growth of Pilsen and new immigrants would eventually head in a southwest direction to a new community known as Little Village which would later become one of the most prosperous commercial zones in the city.

Taking Off in the City, is also unique in another way in that it is a book written by a former resident of the Near West Side who visited Hull House as a child and attended its Bowen Country Club summer camp. Delgado, born in Monterey, Mexico, was brought to this country as a young child.

University students, professors, activists and community organizations will most likely benefit greatly from having this book around.

Besides being written in a very readable style, the book contains good information and statistics of all kinds. No doubt in 1978 Delgado put his heart and mind into this groundbreaking thesis.

In the introduction, Delgado readily states that he hopes the book will dispel any notions that the now large Mexican community has never contributed anything to the growth of the city.

Delgado contends that the Mexican immigrants to the city since the 1920s have sought to create a cultural space similar to the one they have left behind in Mexico.

“Mexican immigrants to Chicago created their own institutions and through accommodation pursued a life culturally similar to the one they had left in Mexico,” states Delgado.

Most of the first early Mexican arrivals in the 1920s were from the states of Guanajuato, Jalisco and Michoacán. They mainly worked at the meatpacking plants, railroad yards and the steel companies.

As the book painstakingly details, these Mexican workers were assigned the worst and filthiest low-paying jobs, often at the rate of 44 cents an hour.

By the latter half of the 1920s, three distinct Mexican communities began to emerge in the city. One was in South Chicago, the second in Back of the Yards and the third one around Hull House at Halsted and Polk streets. This was by far the largest with close to 2,742 Mexican people.

It is most interesting to note that Delgado shows that from 1920 to 1930, the three Mexican colonias combined had a total of 39 newspapers such as El Heraldo, Mexico, La Defensa, El Nacional and many others.

As to institutions, the early Mexicans founded a plethora of organizations such as sociedades mutualistas, theater groups, music groups, recreation clubs, religious societies and political organizations too numerous to list. They even had their orchestra, La Banda Mexicana de Chicago, composed of 53 members with their Mexican military uniforms. In April of 1928, an estimated crowd of 5,000 people attended their inaugural concert. The band eventually even made their own records.

But working-class laborers were not the only ones that had fled Mexico during the bloody Mexican Revolution of 1910. According to Delgado’s excellent historical account, there were also many Mexican “postmasters, customs collectors, college and schoolteachers; diplomatic officers; army officers and writers and clerks” who came to Chicago.

At the conclusion of his study, Delgado, writes that what emerges is “a heterogenous group of bronzed people, strong, proud, honest, hard-working and dignified who were and are determined to make a better life for themselves, their families and their paisanos.”

This is a welcomed account by a fine Mexican local historian such as Mr. Delgado, even if somewhat late. Marc Zimmerman, director of LACASA Chicago Press, also deserves a thumb’s up for rescuing this important book from oblivion and making it available for all us.

The book is written in English but perhaps this work can one day be translated into Spanish as well for the benefit of the community.

The book will be available soon in bookstores, now available through www.amazon.com, or at reduced price at www.marczimmerman.net or dradelgado@hotmail.com.

Writer and journalist and a regular contributor to El BeiSMan. This fictional story is from the writer’s recently completed book An Old Man, In a Dry Season, Waiting for Rain. Zavala is the author of two other books, Pale Yellow Moon and Memorias de Pilsen.