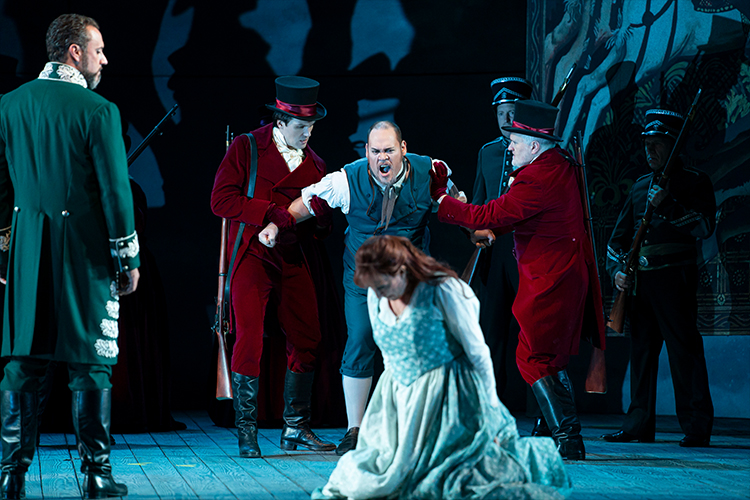 Luisa Miller at the Lyric Opera

In the finest tradition of Opera, Giuseppe Verdi’s, Luisa Miller has all the ingredients of a great tragedy. Star-crossed lovers, deceit, betrayal, murder, jealousy… all mostly due to parents wanting the best for their children, even if said offspring are not on board with the program. The story opens brightly on a warm morning. Luisa, a peasant girl (played by the soprano, Cassimira Sotyanova) and Carlo (tenor, Joseph Calleja whose velvety voice is what amore sounds like), declare their mutual love among the village peasants. What Luisa doesn’t know is that Carlo is not really a peasant; he is actually Rodolfo, the son of Count Walter (bass, Christian Van Horn), who, unbeknownst to Carlo, has pledged him to marry the elegant and voluptuous, Duchess of Ostheim (mezzo-soprano, Alisa Kolosova). It all goes downhill from there, as Wurn, the Count’s steward (bass, Solomon Howard) is in love with Luisa and hurries to reveal Rodolfo’s shenanigans to his father. The cast’s powerful performances, including Miller’s (Luisa’s father played by baritone Quinn Kelsey), are worth pages and pages of praise (Van Horn and Calleja got, as far as I could tell, the most Bravo’s in the house), but I’d like to focus this time on the actual stage. Designer Michael Yeargan sets the story against a sectioned wall that shows the shadowed outline of a mountain forest. A crane boom holding a huge frame pierces the right side of the wall and serves as set decoration, revealing different images as it turns to one side or the other when the scene changes. The wall’s sections lift and drop, to give way to set pieces (including the enormous horse where the Countess of Ostheim is perched when she shows up for the first time), strategically placed props and many-colored light. Lighting Designer Marc McCullough’s masterful use of light, softens the boom’s industrial feel. This “play” with light, provides the story’s atmosphere, casting shadows and, at times, using the ensemble to represent vignettes that add to the drama unfolding on stage. Thus, the set is also an important character that shines as much as the actors and singers. Luisa Miller’s libretto was based on Schiller’s play “Intrigue and Love”, and was first presented in December of 1849. Although the story may seem passé, the premise has been very popular since then: bourgeois son falls in love with poor girl and fights his crazy mom/dad/aunt/uncle who will do everything to avoid the union. If you think this is an “old” story, just look at King Felipe of Spain, who married Letizia, an ordinary, middle-class girl, much to his father’s chagrin. If you are craving a big, beautifully set, telenovela-style drama, hurry up, because there are only two performances left (10/28 and 10/31)!