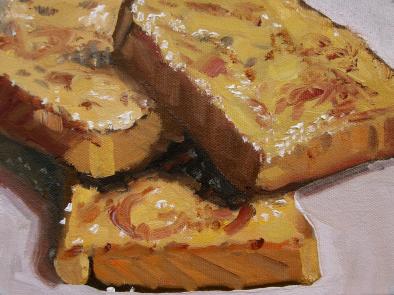 The day my father made us breakfast for the first time came about unexpectedly, and only because my mother couldn’t do it. She had to work. Not that my dad didn’t have to, but…well, allow me to explain.

My mother’s first job was babysitting two white kids. The first one was a boy we called Sweet Pea because that’s what his mom called him. His name was Joshua, but no one called him that even after he left our house and ended up with some friends. The second was a girl who was afraid of the dark, so my mom would leave the closet light on until morning when she stayed over. I don’t remember much more about her, but she was nice.

So began my mother’s official work in the United States. Eventually, she left babysitting, and sadly future jobs pulled her out of the house and away from children. She never liked that much. In part, because she had been a teacher in México, but also because she missed us almost as much as we missed her. She especially missed the kitchen. It was and remains her place of artistic passion and flair. She would spend hours trying new recipes and perfecting some passed down by family.

One of her first jobs outside of the house was working at a Pepe’s Tacos on Calumet Avenue. She hated that job in large part because they didn’t care much about food.

If she ever brought food home from there, she prepared it herself though she didn’t work there very long and eventually found a job at a meatpacking plant somewhere else in Hammond, Indiana. It was the graveyard shift and it was another job she hated, but it was about making ends meet. She endured.

That’s when the trouble started in the kitchen. She would arrive home at 7:00 in the morning to sleep and because my father worked in the evenings, he would get up to serve us breakfast. It was simple the first couple of weeks. My mom would prepare something before she left to work – oatmeal or bread and Mexican hot chocolate or beans and eggs – and leave that in the fridge. My dad just had to serve the food or warm it up.

Eventually, something happened, and there was no food ready to go, so my mom told my father, “Prepara un French tos,” which he did in his no nonsense style. My mom had left most of the ingredients ready anyhow. He had it all figured out. “Está fácil,” he said as he lumbered down the stairs to our basement kitchen and past the grumbling, empty stomachs of three growing children. The sweating, tall, cool glasses of milk were waiting too – lined up next to plates, forks, knives, butter and maple syrup. We were ready for my father’s first performance on the cooking stage.

He tore open the bag of bread, and placed two slices in the toaster (set on high). When they popped up, he threw the dark, brown pucks into beaten eggs and then served them to my sister.

“¡No!” we said hoping to prevent a disaster.

My sister grabbed a pan while my brother put cinnamon and vanilla into the eggs, added milk and proceeded to cook the bread as my father sat and watched, mystified by our knowhow and skill. My brother was only nine. My sister was five. I was seven. After breakfast he laughed at his mistake and the episode became part of family lore. I also think that’s why he never became a trusted cook, not like my sister or me. He would eventually earn a spot in the kitchen as an assistant or the charge of making licuados, juices and some simple salsas. Those thankfully are harder to to mess up.

And my mother… my mother would eventually leave the graveyard shift at the food plant, but still migrate from job to job, assembling coats, making tortillas, stuffing and stitching up accent pillows… whatever she could find.

Juan Carlos Hernández is a teacher, journalist, film and television producer, writer and independent author — in essence a storyteller in a variety of mediums. He began his journalism career in Guadalajara, Mexico and did a short stint in the Czech Republic before earning an M.S. from the Medill School of Journalism. His first book, Lost and Found on the Camino de Santiago is a fictional travelogue to be released in late 2014. He will soon start he manuscript for his next book, a collection of vignettes.