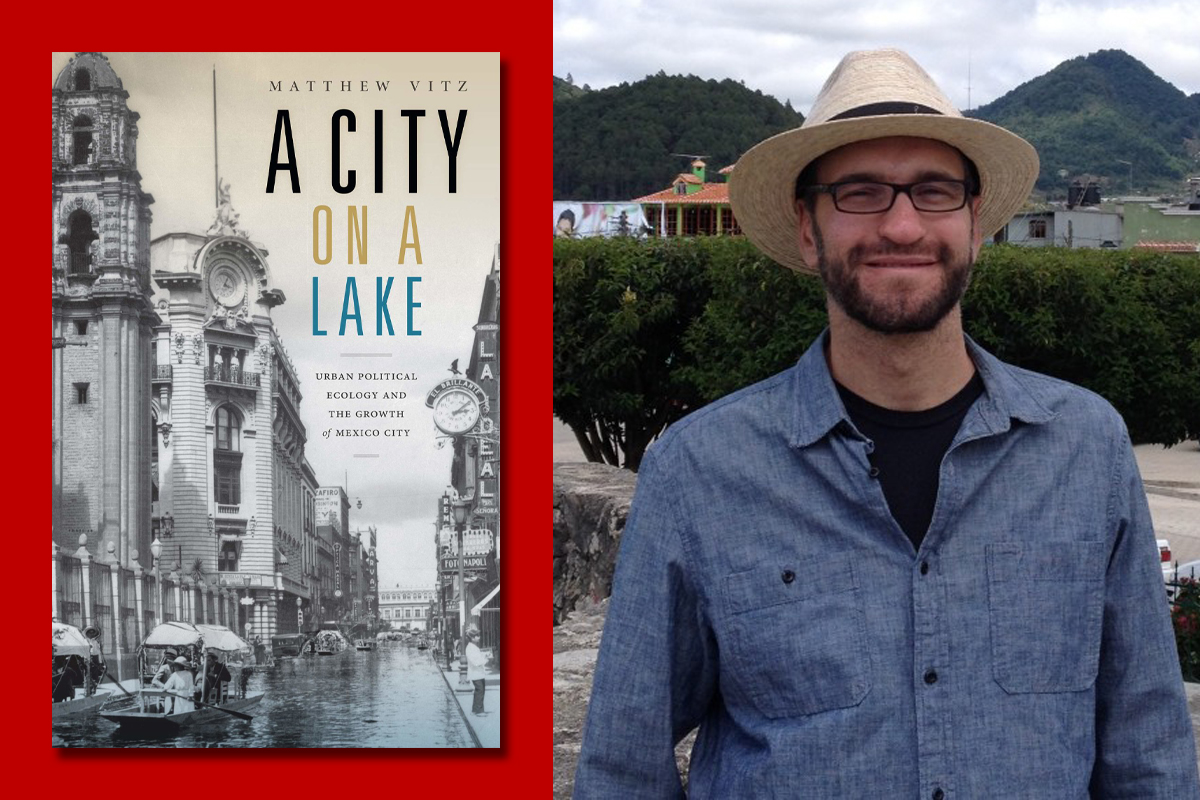 ‘City on the Lake: Political Ecology and the Growth of Mexico City’

In a City on the Lake: Political Ecology and the Growth of Mexico City, Professor Matthews Vitz of the University of California at San Diego (UCSD), writes and interesting and easy to read biography of Mexico City through the lens of various environmental factors like water, wood, and Homo sapiens. Vitz received his Ph.D. in Latin American and Caribbean History from New York University in 2010, and his book manuscript is very much based upon that work. According to his webpage, the work “reinterprets Mexico City’s rapid twentieth-century growth as a series of social conflicts and scientific disputes over the material environment in which a technocratic-industrial urban vision eventually prevailed over more environmentally just alternatives springing from the politics of the Mexican revolution. The book unites social and political history with the theoretical and conceptual tools of urban political ecology to understand how diverse peoples have experienced urbanization and how urban power is created and contested through environmental change.” This “urban political ecology” in the form of forests, waterscapes, and human consumption and protestation is primarily focused on what Mexicanists frequently refer to as the “modern era,” in this case beginning with a rich and satisfying chapter on the Porfirian era. Unlike your usual and stereotypical views that usually provincialize Mexican state building and modernization projects, Professor Vitz paints a picture of a modern and organized era that in terms of engineering was a “Porfirian watershed.” (22)

Divided into seven chapters, and by two sections, the book totals a little bit over 300 pages if you include bibliography, endnotes, and index. In this regard, one could make the argument that although each of the chapters focuses on some particular aspects of the environment like forests, waterscapes, human protests, each of the chapters in and of themselves also cover a particular presidential period. As such, the first chapter is on the Porfirian era, whilst the following is on the revolutionary era, followed by a chapter on Carranza, then Calles, Cardenas, and ending with Aleman...more or less. Although the work is also located as an Environmental History of sorts, for this Mexicanists that is not an expert in the area, I saw it a bit more in the traditional social history modality than, say, something akin to the kind of “environmental histories” that one often reads with Edward O. Wilson, Thor Hanson, Richard C. Francis, or even Charles Mann. Empirically speaking, and aside from dividing each of the chapters into sexenios to some degree, the author leaves no question in mind how he was trained, and this is as a proper Mexicanist. His bibliography and prodigious use of Mexican sources is worthy of mention, and has certainly garnered my respect. Also worthy of note is that the author was also particularly engaged with all of the most important and towering intellectual figure of their day, and how their own works, influenced these kinds of policies. Vitz cites from the likes Quevedo, Molina Enriquez, and Gayol to mention only those I’m more familiar with, but also brings up titles and studies from each of these authors, among so many other cientificos, that these were a revelation in and of themselves.

Historiographically, the book is part of a larger tradition that looks at the incredible and unprecedented growth of Mexico City. Here Professor Vitz is contributing to that historiography by discussing the environmental aspects of the city during the periodization I’ve already indicated. As such, there will be very little discussion here about the growth of the city during the colonial era, or even it’s more humble beginnings as the city-state of Tenochtitlan. Such a longue duree approach to the environmental history of Mexico City would have surely taken Vitz off track.  As such, what the author is attempting to do in this book, is to “underscore the ways in which non human nature rather than being torn asunder was inextricably joined to the built environment in the process of urbanization. I uncover largely forgotten histories of popular groups government officials and planners disputing Urban growth and at certain moments promoting more just and environmentally-sound visions of the city and its Hinterland. Mexico City’s enormous 20th century growth was embedded in and forged out of an overlapping set of contingent, if structurally conditioned, social conflicts in scientific disputes over its Dynamic Metropolitan environment—the lands Waters forests Network infrastructure and new subdivisions all of which were tightly bound to urbanization.” (6-7). In the end, I thought the author set out to do what he promised, and I recommend it to those interested in the growth of Cities more generally during this past century; experts on the environment, and the role of everyday people learning to live with nature.

Associate Professor of History at the University of Massachusetts, Amherst (UMASS) where he taught for six years. Professor Hernández has also taught college courses at DePaul University and at The University of Chicago. Recently, Professor Hernández was awarded a Fulbright US Scholar award to research the Colonial Archives of Cebu City and Manila, Philippines for the Academic Year 2019. His long-term project is titled “Comparative Colonizations on a Global Scale” and seeks to compare the varied experiences, effects, and expressions of Spanish Colonization in Asia with that of the Americas and the Caribbean. He is the author of Mexican American Colonization During the Nineteenth Century: A History of the US-Mexico Borderlands, (Cambridge; New York: Cambridge University Press, 2012).